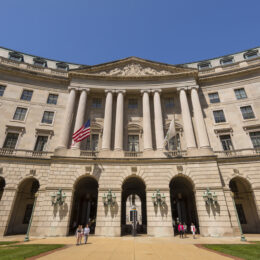 PFAS – or per-and-polyfluoroalkyl substances – is a group of around 4,700 chemicals found in consumer goods and household products–from pans and pots to pizza boxes and take-out containers. Since the early 20th century, manufacturing companies have harnessed PFAS to create products that can repel water, grease, and oil. Teflon is one of the best-known examples of the practical uses of PFAS.

While PFAS can be useful, they’ve become a serious health risk, especially when it comes to our tap water supply. Here are 3 things you need to know about the EPA’s latest policy on PFAS:

1. The regulation only impacts two types of PFAS and forces polluters to pay costs.

The EPA has yet to regulate PFAS as a class of chemicals on its own–and instead has opted to rule on individual PFAS.

This latest rule is narrow in scope: it labels PFOA and PFOS, two of the most extensively produced PFAS, as hazardous substances. The proposed rule will appear in the federal register in the coming weeks, where the public will have a 60-day window to provide comments before the proposal is finalized.

If the proposal is approved, releases of certain amounts of PFAS will need to be carefully reported by companies. In the EPA’s view, this regulation will cause companies to maintain better waste management and force polluters to pay costs: “The rulemaking would increase transparency around releases of these harmful chemicals and help to hold polluters accountable for cleaning up their contamination.”

2. The new rule underscores the health risks posed by PFAS.

Pointing to evidence from laboratory and epidemiology studies, the EPA’s ruling cites “[PFAS’] substantial danger to human health or welfare and the environment.”

The nickname “forever chemicals” points to the fact that PFAS don’t break down and persist in the environment. PFAS are so pervasive that they have polluted drinking water and even been detected in rainfall in the remotest parts of the world.

Exposure to PFAS can lead to adverse health effects–such as reproductive issues, heart problems, cancer, and a decrease in immunity. Worse yet, an NIH study found that upwards of 98% of Americans have PFAS in their bloodstream.

Even with this latest ruling, though, environmental groups and leaders fear the EPA isn’t doing enough to tackle the worst of PFAS.

“EPA actions are too little and too late,” Tim Whitehouse, executive director of Public Employees for Environmental Responsibility, said. “[The government’s] been fiddling around trying not to upset chemical companies and communities suffer.”

Back in June, the EPA issued an advisory for limits on the PFAS chemical GenX in drinking water. It also noted that even tiny bits of PFAS in water is considered unsafe.

But this new move provides no new guidance on what to do about the evergrowing impact of PFAS on water systems, especially as more municipalities and states are realizing how prevalent the harmful chemicals are.

For instance, the U.S. Geological Survey found that 67 of West Virginia’s water systems contain at least one form of PFAS. Likewise, Cambridge recently discovered that high levels of PFAS exist in its drinking water.

While water systems remain unregulated, water bottle companies are already taking the initiative to address PFAS. The International Bottled Water Association requires its members to have no more than 5 parts per trillion per PFAS.

Simply put, water systems are far behind when it comes to regulating PFAS and lack the filtration systems to drastically lower PFAS levels.