A Wolf in Puppy’s Clothing 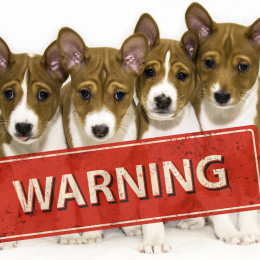 Three economists out of Harvard and Vanderbilt recently published a paper on risk management which reflects much of what we believe about warning labels.

Current warning systems, such as California’s Proposition 65, fail to differentiate between large and small risks – or, as the authors put it, wolves and puppies. Puppies are common, and although their nip may hurt, a pup doesn’t pose much of a threat. Wolves, on the other hand, are rarely seen, but can introduce real risk to your (or your puppy’s) well-being.

When people are told to fear both wolves and puppies equally, the warning quickly becomes ineffective. People become habituated to puppies and don’t perceive danger in their presence. When a wolf comes along under the guise of a puppy, the threat isn’t treated with the gravity it deserves.

Like a boy crying wolf, warning labels lose power when they proliferate. They become no more than white noise for consumers already inundated with information.

Willful ignorance can be incredibly dangerous when consumers become habituated to seeing “WARNING: This product contains chemicals known to the State of California to cause cancer and birth defects or other reproductive harm” on their toothbrush and not dropping dead every time they brush their pearly whites. Certain labels, such as those cautioning against mixing bleach and Windex, indicate a real and immediate risk. But without the background knowledge to distinguish between a wolf and a puppy, the average consumer may pay such warnings no mind.

You can read the full paper HERE and find out for yourself why, when it comes to warning labels, we can definitely have too much of a good thing.