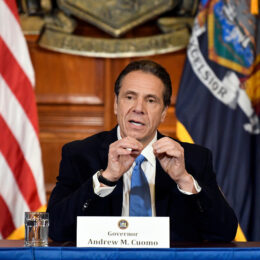 New York Gov. Andrew Cuomo announced his plan to help the economy and environment of the Empire State by implementing a massive green energy scheme.

Cuomo announced that New York could be spending billions of dollars to expand solar and wind power in the state. His plan includes the development of two new offshore wind farms off of Long Island and 68 other large-scale onshore wind and solar farms.

The governor claimed that this large project will help New York achieve its goal of having the power grid run on 70 percent renewable energy by the year 2030.

While the plan has billions of dollars headed toward wind and solar projects, Cuomo did not mention nuclear power at all during his four-day-long state of the state address.

New York is halfway to its goal of 70 percent clean energy by 2030 on nuclear power alone, yet Cuomo did not mention this during his green energy discussion.

When it comes to wind and solar power, there is a lot of ground to cover — literally. Currently, just 3.2 percent of the state’s power comes from wind and 1.4 percent comes from solar, despite several wind and solar installations. These renewable energy facilities take up a lot of space and can be unsightly. Cuomo reiterated several times that his two new offshore wind farms would be 20 miles away from shore so they would not disturb the ocean views on Long Island.

Because wind and solar energy are unreliable, Cuomo is also installing a 20-megawatt battery storage project to store energy for days when there is little wind or sun. This battery facility can store enough power for 1.2 million homes, but New York must also implement a new power infrastructure to help carry this energy throughout the state.

This massive battery storage project will require many rare earth elements that are hazardous to produce. Battery production is also very energy-intensive, meaning the net emissions savings may not be as high as they seem.

If the focus of this project is simply to create jobs, Cuomo could have success. Cuomo estimated that there could be tens of thousands of new jobs for the people who will be manufacturing and maintaining the new wind and solar installations. These jobs are expected to be long-term opportunities, which makes sense considering wind turbines have a lifespan of just 20 years and they need to be replaced and repaired frequently.

Most existing nuclear power plants have at least 70 more years before they need to be reconstructed in the United States. New facilities can last well over 100 years.

If officials in New York care about reaching their goal of having 70 percent of their power come from clean sources, they are wasting their time and money by dropping billions of dollars into wind turbines, solar panels, and mega-watt batteries.