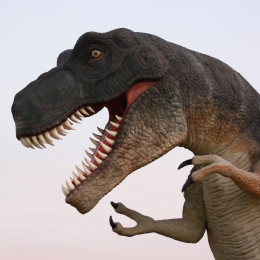 In a new opinion piece for the Tampa Tribune, Dr. Joseph Perrone argues that despite activists’ assertions that today’s GMO foods might pose a greater threat to humans than the genetically modified dinosaurs on the loose in the current film Jurassic World, there’s absolutely no evidence to support this overwrought alarmism.

“Jurassic World” has received a lot of criticism, from paleontologists who point out that the film ignores new discoveries about dinosaurs (many had feathers!), to feminists who point out the impracticality of our heroine traipsing through the jungle in high heels. Still, the film is smashing box office records with its cautionary tale of what happens when humans tinker with nature and create a genetically modified dinosaur.

For most viewers, seeing Chris Pratt battle a genetically modified dinosaur in “Jurassic World” is no more realistic than seeing him battle an extraterrestrial supervillain alongside his talking raccoon sidekick in “Guardians of the Galaxy.” To environmental activists, however, “Jurassic World” is a warning to movie-goers about what they call the “real-life risks associated with genetic engineering.”

In the real world, scientists and farmers are using genetic modification to safely tweak crops, known as GMOs, that can feed more people using fewer resources and pesticides. Although activists claim that these foods are more dangerous to your health than “juggernaut dinosaurs,” scientists haven’t found any such risks.

A recent research review of over 1,700 independent studies on genetically modified technology published in Critical Reviews in Biotechnology concluded, “The scientific research conducted so far has not detected any significant hazards directly connected with the use of genetically engineered crops.”

You can read the rest of Dr. Perrone’s piece on the Tampa Tribune’s website here.