Are you getting a side of plastic with your takeout? 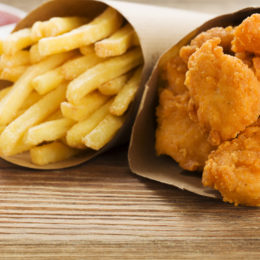 On Sunday, Senate minority leader Chuck Schumer called on the U.S. Food and Drug Administration to investigate the health consequences of using phthalates in food packaging.

Rather than referring to one chemical, “phthalates” are a family of compounds often used to make plastics flexible and resist breakage. They’ve become a hot topic after some studies suggested the amount of phthalates in a person’s urine is associated with ailments like increased blood pressure and poor development of the male reproductive system.

No, really. The FDA maintains a database of “food contact substances,” or chemicals which are used in food preparation, storage, and so on. DINP and DEHP, two phthalates which one highly publicized study tried to tie to fast food packaging, aren’t in the database at all.

DINP is widely used in construction to soften PVC and plastic wire coatings, and waterproof building exteriors. DEHP is often used in medical devices like air tubes and IV bags, as well as in fragrances. When these phthalates are used to soften plastics, they’re woven into the product’s molecular network and don’t easily migrate out.

The issue is that the popular studies fueling the “phthalates are in your food” narrative don’t actually measure phthalates in fast food. Rather, they measured the level of phthalates in study participants’ urine, and asked what the participants had to eat in the last 24 hours.

It’s a matter of correlation versus causation. After all, ice cream sales and shark attacks both tend to rise at the same time of year, but one doesn’t cause the other.

But regardless of where phthalate exposure originates, it’s important to put risk in context. In its Fourth National Report on Human Exposure to Environmental Chemicals, the U.S. Centers for Disease Control and Prevention (CDC) reports that phthalate exposure is very low. And although we have developed technology powerful enough to detect the presence of phthalates at extremely low levels, the CDC notes “[f]inding a detectable amount of phthalate metabolites in urine does not imply that the levels of one or more will cause an adverse health effect.”

As Dr. Paul Serhal, Medical Director of England’s Centre for Reproductive and Genetic Health put it, “[h]aving an egg for breakfast in a non-stick pan, protecting your skin with factor 20 or driving a car with new upholstery – none of them is a realistic risk.”

To put it simply: When it comes to plastic packaging, the food in it has a far greater impact on your health.