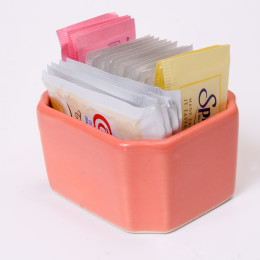 In case you needed further evidence that scientific opinion is constantly changing, new research presented this week finds evidence that saccharin, an artificial sweetener found in brands like Sweet ‘N Low ®, may be a tool in treating cancer.

The researchers found that saccharin binds to a protein found in many cancerous cells, carbonic anhydrase, disrupting its activity and potentially stopping the growth of cancerous cells. Researchers hope saccharin could become the basis for new cancer-fighting drugs.

Oddly enough, health activists have long vilified artificial sweeteners like saccharin as possible carcinogens. A few studies in the 1970s linked saccharin to bladder cancer in rats, but more recent studies haven’t shown evidence of cancer in humans. The National Cancer Institute notes: “Because the bladder tumors seen in rats are due to a mechanism not relevant to humans and because there is no clear evidence that saccharin causes cancer in humans, saccharin was delisted in 2000 from the U.S. National Toxicology Program’s Report on Carcinogens, where it had been listed since 1981 as a substance reasonably anticipated to be a human carcinogen (a substance known to cause cancer).”

It’s certainly too soon to call saccharine a “miracle cure,” but the initial findings are promising and further research needs to be conducted. As always, we caution this is just one study and too soon to make any sweeping judgements, but we can safely add saccharine to our list of foods that studies have indicated might both cause and cure or prevent cancer.