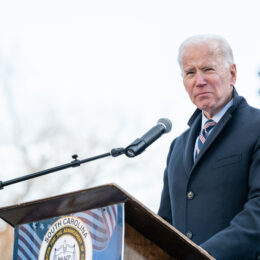 Labor unions, local governments, and leftwing Canadian Prime Minister Justin Trudeau all expressed frustration with Biden’s decision because many workers in the energy sector will likely lose their jobs.

Economics aside, many others have raised concerns about whether these two policies will even help the environment, as Biden claims they will.

The Keystone XL pipeline stretches from Alberta to Texas. When complete, the pipeline could carry as much as 930,000 barrels of tar sands oil per day to the Gulf Coast of Texas. Environmentalists and Native American tribes opposed the installation of the pipeline and Biden sided with them in announcing his decision to halt construction.

In his executive order, Biden said it was necessary to halt the project because using it to transport oil could “undermine U.S. climate leadership by undercutting the credibility and influence of the United States in urging other countries to take ambitious climate action.”

While Biden was quick to axe fossil fuel sources, he doesn’t have a backup fuel supply ready for the American people leaving many critics to question whether his plan is actually good for the environment.

For example, opponents to Biden’s plan noted that pipelines are much safer than other modes of transporting oil. There is a 4.5 times greater chance that oil will spill when it is transported by train compared to pipelines. When spills do occur with pipelines, more than 80% of the spills occur at the facility rather than on the pipeline itself. Because of this fact, 99% of pipeline spills that took place from 2003 to 2013 did not damage the environment and spills were contained.

Without pipelines, oil will be transported by truck or train which could potentially lead to more oil spills, not fewer. This is not to mention the additional carbon emissions needed to power the trains and trucks. There is also a physical safety element to the change. Pipelines are the safest way to transport fuel because train conductors and truck drivers are not at risk of a crash.

There is no sign that demand for oil will decline in the coming months, either. If oil is not flowing from the U.S. or Canada, it will be sourced from other countries — likely in the Middle East — that are not held to Biden’s environmental standards.

Mike Sommers, the CEO of the American Petroleum Institute, summarized his criticisms of Biden’s plans in an interview with the Associated Press.

“Pipelines are the safest, most environmentally friendly way to transport energy, and the economy cannot recover at full speed unless we deliver reliable energy from where it is to where it is needed,” Sommers said.

Lastly, despite the fixation from environmental campaigners and their political allies on this one pipeline, the United States already has more than 2.5 million miles of pipelines. The singling out of this one project is a lot of posturing for fundraising purposes by environmental activist groups.

Biden announced on day one of his presidency that he had implemented a 60-day moratorium on new fossil fuel drilling on federal land. It could be extended indefinitely, and Biden will be pressured to do so.

Roughly 22% of oil and 12% of natural gas is sourced on federal land. Only new leases are affected by Biden’s decision, but the process of fracking for natural gas requires multiple leases that are renewed regularly. If the moratorium stays in place for an extended period, the Biden administration could effectively halt fracking on federal land altogether. Officials in New Mexico warned that this could devastate the fracking industry in the state, as more than two-thirds of its natural gas is sourced from federal land.

Again, it is not clear that Biden’s moratorium will help the environment.

The demand for energy is not expected to change and alternative energy forms such as nuclear power or wind turbines do not appear overnight. The U.S. will either have to transport its natural gas from other countries to meet demand or switch to another fuel source.

This is problematic because cheap natural gas has been credited for the decline in U.S. carbon emissions. Natural gas became cheaper than coal, prompting Americans to switch to the cleaner fuel. If the cost of natural gas rises in the U.S., some consumers may resort to coal or other dirtier fuels.

As Texas Oil and Gas Association President Todd Staples said, “Increased use of natural gas is the No. 1 reason U.S. power sector carbon dioxide emissions have fallen 33% since 2007.”

Overall, there is no clear evidence that Biden’s executive orders will benefit the environment or prevent climate change, especially considering that these policies only impact the U.S. while countries like China and Russia are free to continue pumping for gas and oil.