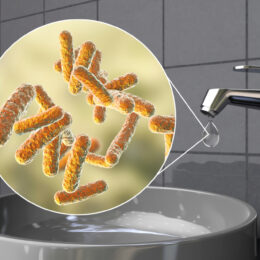 If you have a sensitive stomach and drink tap water, you may want to stop reading here.

A new study from the Centers for Disease Control and Prevention found that biofilm — a sludge coating consisting of bacteria, fungi, amoebas, and other microorganisms — is lining more than six million miles of tap water pipes in the United States. Sarah Collier, an analytic epidemiologist at the CDC who led the study, described it best in an interview with CNN:

“If you’ve ever felt that slimy film on your teeth when you haven’t brushed in a while, that’s a biofilm,” Collier explained. “Biofilms tend to form anywhere there’s microbes and water.”

The study, which was published in the journal Emerging Infectious Diseases, revealed that an estimated 7.15 million Americans fall ill because of waterborne diseases each year.

Waterborne diseases are responsible for 601,000 emergency department visits and 118,000 hospitalizations, according to the study. Even worse, an estimated 6,630 die each year from waterborne illnesses.

The two most common infections included swimmer’s ear and norovirus infections, which cause vomiting and diarrhea.

Nontuberculous mycobacteria (NTM) was the most fatal pathogen commonly found in biofilm. NTM targets soft tissues in the lungs and skin. NTM alone caused 51,400 hospitalizations (44% of the total for waterborne illnesses) and 3,800 deaths (57% of the total) each year.

Legionella, the bacteria responsible for Legionnaires’ disease, causes a pneumonia-like illness called Pontiac Fever. Legionnaires’ disease causes 995 deaths, roughly 15% of the total for waterborne illnesses. Pseudomonas pneumonia is also caused by pathogens in biofilm which lead to 15,500 hospitalizations and 730 deaths each year.

Roughly 90% of all waterborne illness deaths and more than half of the hospitalizations from waterborne diseases developed from those three airborne pathogens that all thrive in biofilms.

These hospitalizations add up. Americans are spending $3.3 billion annually in direct healthcare costs because of waterborne illnesses.

Collier said that understanding these waterborne illnesses that have been traced back to biofilms is a “new frontier” in infectious diseases in the U.S., in part because some of these pathogens are not easy to control.

The parasite cryptosporidium is a microscopic parasite that causes severe diarrhea that can be fatal in immunocompromised people. According to the CDC’s report, cryptosporidium is “extremely chlorine resistant” meaning common disinfectants used to treat water do not stop it from thriving. The parasite can cause illness even in low concentrations.

Collier said that waterborne illnesses can be a problem, no matter how responsible the water treatment facility in the community is.

“Drinking water from the treatment plant to your water meter is really heavily regulated and a lot of work is put into making sure that it’s safe,” Collier explained. “Once it’s in your house or in a building, however, it’s on the individual homeowner or the building owner to make sure it’s safe.”

Contaminated tap water is a dangerous and costly problem for the United States. Americans, especially those with compromised immune systems, must be made aware of the risks of consuming tap water so they can decide the best way to keep themselves and their families safe.