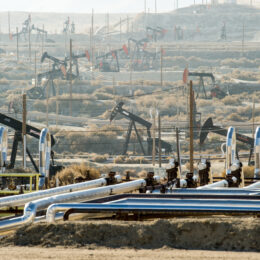 A new bill in California could completely end all fracking in the nation’s third-largest state by area.

The legislation, proposed by Democratic State Senators Scott Wiener and Monique Limon, will halt all new oil and gas permits by the end of the year and completely outlaw the practice of fracking by 2027.

Hydraulic fracking is the process of tapping natural gas earth’s crust by splitting layers of rock to release the gas. Natural gas is a carbon-based energy source used to heat homes, run stoves, and power entire cities. Wiener said that the legislation is essential to help end climate change.

Weiner’s legislation will also close all oil wells in the state. California has been gradually forcing an end to oil production. In 1985, California was one of the top oil-producing states in the nation. At its peak, California harvested 394 million barrels per year. Now, California isn’t even in the top five states for oil production, despite its massive land area. California still has 5,500 oil wells generating $152.3 billion in revenue and $21.5 billion in state and local taxes for Californians, but Wiener wants to shutter them all. He said forcing the wells to close could actually help workers.

“It’s a declining industry. And instead of waiting for it to eventually decline and fall apart, let’s get ahead of it, facilitate the phasing out and help the workers,” he said.

It doesn’t make any sense that eliminating jobs will help workers, but then again, the legislation as a whole doesn’t make that much sense.

In the world of emissions, natural gas is the 2020 Toyota with a fuel range of more than 40 miles per gallon. Coal is the 1970s clunker that is somehow still rolling down the street with a cloud of black smoke behind it. Yet California is targeting natural gas without offering a serious replacement.

With the exception of nuclear energy, alternative energy sources like wind and solar are not efficient enough to power a state as large as California. California already struggles with keeping its power grid afloat. During the hotter months of the year, California has rolling blackouts because the power grid cannot sustain the added demand.

California will still need carbon-based fuels to keep the lights on. But instead of that fuel coming from California workers, it will be shipped in from Texas, North Dakota, or other states that have not buried their heads in the sand when it comes to energy production.