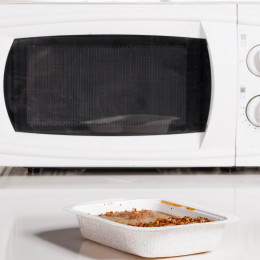 Unfortunately, Dr. Oz is far from the only M.D. using his powerful platform to spread serious misinformation. On CBS’s This Morning, the network’s medical contributor, Dr. David Argus, botched his explanation of new research showing a possible link between the presence of two phthalates in children’s urine and slightly higher blood pressure and insulin resistance.

Phthalates are used in many parts of the food production process—they can be found in conveyer belts, tubes used to carry liquids, the outer wrapping of packaged foods. However, they’re not generally used in containers meant to go in the microwave—a fact you wouldn’t understand if you watched Dr. Argus.

To explain the study to the show’s anchors, Dr. Argus held up a few food containers and explained that when food is microwaved in those containers, the chemicals can leach into the food. But none of the containers he showed were phthalate-containing plastic containers meant to go in the microwave! Microwaving food in plastic would not increase the amount of phthalates found in the resulting food.

Even if you don’t put food containers in the microwave, the study’s findings aren’t cause to panic. The study did not show that higher exposure to phthalates caused these potential health problems in children. The study’s authors even point out that the findings could be explained by the fact that “insulin-resistant children have unhealthy eating behaviors including more packaged food consumption, and thus have higher urinary levels” of phthalates.

CBS isn’t the only major news outlet to dramatically overstate the researchers’ findings. The NY Daily News wins for most outrageously incorrect headline: “Microwaving food in plastic linked to diabetes, other problems: study.” For the record, insulin-resistance is absolutely not the same thing as diabetes and the study says absolutely nothing about microwaving.

Consumers shouldn’t be afraid to put microwave-safe (read the label!) plastic containers in the microwave. We certainly don’t advise using some of the suggested alternatives (like aluminum foil) or this could happen.