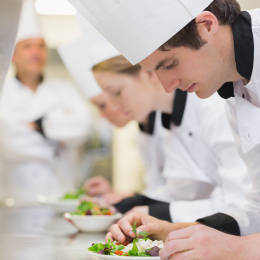 This week, hundreds of gourmet chefs delivered a petition to Congress urging lawmakers to mandate the labeling of genetically modified foods, claiming “when it comes to whether our ingredients contain genetically modified organisms, we’re in the dark.” But are they really?

GMO-free labels already exist. If chefs want to avoid genetically modified foods, they can simply opt to purchase organic produce. Organic labeling is regulated by the U.S. Food and Drug Administration already and requires that foods be free of GMOs.

Labeling might make sense if GM foods contained different amounts of calories or vitamins, but there’s no appreciable nutritional difference between genetically modified foods and conventional foods. Nor are there any health risks to humans—an assertion backed up by prestigious bodies such as the UK’s Royal Society, American Medical Association, American Association for the Advancement of Science, and the National Academy of Sciences.

Mandating labels on any product that could contain GMOs would be incredibly difficult (and expensive), but it wouldn’t really tell consumers anything. It’s easy to identify a GM tomato, but it’s nearly impossible to identify GMOs in products like oils and sugars that no longer contain any of the plant DNA or proteins.

Of course, even if we did mandate GMO labeling across the board, few Americans actually know what GMO stands for or what GMOs actually are—as Jimmy Kimmel illustrated in a hilarious video earlier this year. Perhaps these chefs should stick to making delicious meals rather than skewing the facts about perfectly safe foods.