Chemicals in Your Mac and Cheese? 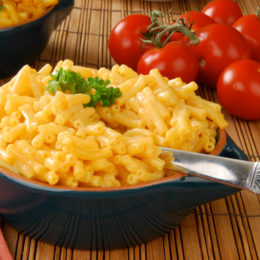 Phthalates: They’re difficult to pronounce, widely used in plastics, rubber, cosmetics, and fragrances, and yes, they’re in your macaroni and cheese. But should you really be worried about the report which inspired The New York Times to editorialize about “potentially harmful chemicals…present in high concentrations in your child’s favorite meal?”

Although phthalates may migrate from plastics to food, they do so in such small quantities that the National Toxicology Program dismisses their risk for causing human reproductive harm as minimal to negligible. Such was the case with this report, but instead of presenting its findings with any context, the environmental advocacy groups which commissioned it twisted the data to suit their need for sensationalism. Press releases, and the subsequent news stories which exploded from the report, wailed about how phthalates were detected in “nearly every product,” and that macaroni and cheese contained more than four times as much as other cheese products.

In reality, the highest concentration which this report found in powdered macaroni and cheese – 218 parts per billion – is too small to even cause an effect in rats, let alone people. For comparison, that’s less than one tablespoon in an Olympic-sized swimming pool. The lowest phthalate concentration detected was 34 parts per billion, which means you would consume roughly one-third of a teaspoon of phthalates if you ate an Olympic-sized swimming pool full of macaroni and cheese.

And as a class of chemicals, phthalates are generally excreted from the body in a number of hours or days. This means the risk of consuming enough phthalates to even damage your body over time is infinitesimally small.

Although the report relegated Easy Mac to public enemy number one – ahead of National Macaroni and Cheese Day, no less – it was neither accepted for publication in a peer-reviewed journal, nor adequate enough to convince participating researchers to lend their names to the data. It was, however, paid for by notoriously biased groups such as We Act for Environmental Justice, Center for Science in the Public Interest, and Center for Food Safety.

Science is already under threat of losing sway in the public eye, and the advocacy groups conditioning parents to needlessly fear their child’s favorite meal certainly aren’t helping.