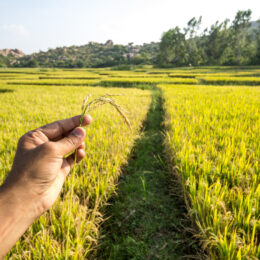 Each year, hundreds of thousands of children suffer blindness, stunted growth, and even death because of the misguided hatred of genetically modified crops from officials at the United Nations.

According to a report from Real Clear Markets, at least 500,000 children have gone blind as a result of a fully preventable Vitamin A deficiency (VAD). Vitamin A is a nutrient commonly found in fruits and vegetables that are plentiful in many countries, including carrots and cantaloupe. While these foods are easy to obtain in the United States, more than one in three children under the age of five around the world suffer from VAD, making it one of the largest public health issues on the globe.

Children suffering from VAD face many grim consequences beyond blindness. VAD leaves children more likely to succumb to other common health problems, including malaria and diarrhea. Many children with VAD have stunted growth.

The horrific reality that more than 140 million children are suffering from VAD inspired scientists in 1990 to come up with a cheap, easily accessible solution to ensure children have a sufficient amount of Vitamin A in their diet.

Scientists ended up creating a vitamin-enriched grain of rice called “Golden Rice.” It was the perfect solution to VAD. Rice is already a food commonly eaten in Asian countries where most of the children with VAD are living. These countries already have the infrastructure to grow rice cheaply and families already know how to prepare rice in meals they eat daily.

Science delivered a safe product that everyone already eats that can cheaply prevent half a million children from going blind or suffering an even worse fate.

This amazing scientific feat should be the end of the story, but it is not.

An anti-genetically improved food agreement promulgated by the United Nations has helped block this life-saving grain from being consumed for decades.

The United Nations’ anti-GMO agreement from 2000 has been signed by 170 countries, including many of the poorest countries on the planet. The agreement forbids many modified foods under the guise of “protecting human health.”

Yet there is no evidence that modified foods are harmful to consume. There is, however, evidence that tens of millions of children are unnecessarily suffering from a wholly preventable Vitamin A deficiency.

More than 150 Nobel Laureates have penned letters to the United Nations urging them to allow all nations to have access to modified crops, including Golden Rice. American officials have also warned leaders at the U.N. that their unfounded opposition to modified crops could cause famine for future generations — as if the children already suffering are not evidence enough.

There is no reason to let poor children go blind and die while wealthy global bureaucrats debate the issue. The UN must open its eyes to the horrific problems that have caused — and will continue to cause — with the anti-scientific hatred of genetically improved crops.