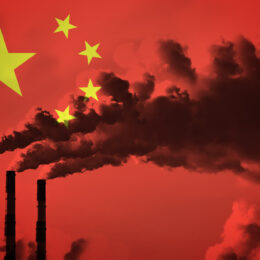 It can be difficult to comprehend just how much more impact China has on the environment than the rest of the world, but a recent report helps put things in perspective.

According to the report from Bloomberg, China is responsible for the same amount of carbon dioxide emissions as the next top four countries (the United States, India, Russia, and Japan) combined. And while the United States has led the world in reducing carbon emissions, China has shown no signs of slowing down. The Chinese Communist Party allows the construction of new coal-powered energy plants regularly and has plans to add at least 43 new coal plants in the coming years.

Chinese officials have pledged to start reducing the country’s carbon dioxide emissions. And even if other countries could take Xi Jinping at his word (they cannot), the goals China has announced are far from lofty. In one official announcement, China said it wouldn’t promise to start reducing carbon emissions until 2026 — and it said they would be increasing their output of carbon by 100 million tons in the meantime.

Beyond emissions, China is also the largest polluter of our oceans. As much as 73 percent of trash found in the Atlantic Ocean was traced back to China in one study published by the Proceedings of the National Academy of Sciences.

It’s clear that China is the main driver of climate change, but most American environmentalists have little to say about that. Instead, they badger mothers to stop cooking meat for their families or condemn fathers who drive to work instead of walking or biking.

In some cases, American environmentalists actively make climate change issues worse by chasing away American producers who, in turn, go to China where there are few environmental protections in place. Environmentalists have also chastised products like plastic water bottles without realizing that banning plastic here will only promote the production of aluminum in places like China.

Fighting climate change needs to be an international effort. Environmentalists who are more concerned about straws or hamburgers should refocus their efforts on the global problem.