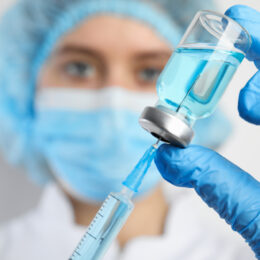 Anti-vaxxers have done all they can to try to dissuade Americans from getting vaccinated, but it hasn’t stopped people from lining up in droves to protect themselves from COVID-19.

Nearly one in four Americans has received at least one dose of the COVID-19 vaccine. The United States has been vaccinating roughly two and a half million Americans per day in recent weeks. Because many states have already vaccinated their healthcare workers, residents over the age of 75, those with compromised immune systems, and many other groups — such as teachers — have been cleared to get the vaccine.

President Joe Biden issued an executive order requiring each state to make all adults eligible for the vaccine by May. He has also stated that the country will have enough vaccines to distribute to all adults by the end of May, as well.

If this plan stays the course, some experts estimate that the U.S. could reach herd immunity by as early as July. Herd immunity is a term that describes the point at which enough people have immunity — either from the vaccine or from recovering from the virus itself — to the point at which the virus struggles to spread and eventually dwindles to just rare outbreaks. When herd immunity is achieved, even those who cannot tolerate vaccines because of immune disorders are protected because those around them cannot spread the virus.

Although the U.S. is well on its way to herd immunity, anti-vaxxers could throw a wrench into things. Anti-vaxxers do not believe vaccinations prevent the spread of diseases, despite their use to eliminate diseases like measles, smallpox, and other horrific illnesses. Anti-vaxxers have been encouraging distrust of the vaccine since the pandemic began.

Some anti-vaxxers have taken extreme measures to discourage people from getting the vaccine. In Los Angeles, law enforcement had to temporarily close one of the entrances into Dodger Stadium during a vaccination event because anti-vaxxers were aggressively blocking individuals from entering the area. The protesters held signs that read: “LA Better Dodge The Vaxxx” and “Covid=Scam.” Other anti-vaxxers have stayed online as they worked to brew fears about the vaccine.

The methods of anti-vaxxers have changed, but there have always been individuals trying to stop others from getting vaccines. Even in the 1700s, anti-vaxxers were making up ludicrous rumors about the smallpox vaccine.

“These kind of rumors have been around ever since Edward Jenner made his smallpox vaccine in the late 1700s,” Dr. Paul Offit, director of the Vaccine Education Center at the Children’s Hospital of Philadelphia, told U.S. News and World Report. “There was a belief if you got the vaccine, which was derived from cowpox, that you would take on bovine characteristics. You’d get a snout, you’d get a tail, you’d get floppy ears. That was the internet [of] 1802, basically.”

Anti-vaxxers will continue to make crazy claims about the COVID-19 vaccine and others, but hopefully they will fail to change the minds of those around them just like the anti-vaxxers of the 18th Century.