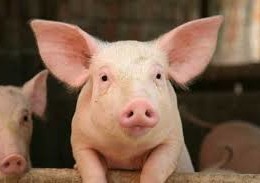 In reviewing the debate surrounding genetically modified crops (GMOs), I came across a recent blog published in Green America citing a 2013 study showing that pigs fed on GMO feed suffered severe stomach inflammation.  Further searching revealed a short blog on a CIRCA app citing the study and touting the same headlines with the additional claim of “damaging effects to pigs”. Though this study is a year old and has its critics, anti-GMO advocates still cite this as a groundbreaking study. In a recent disturbing headline on the website of The Open Mind, the author not only misrepresents the study being done on pigs and cows (only pigs were used), the disturbing photos of malformed piglets never appeared in the actual study.

Piquing my curiosity, I found the original study published in a rather obscure Australian journal, the Journal of Organic Systems, by Dr. Judy Carman.

In her study, two groups of pigs were weaned and raised until slaughter (at 22.7 weeks), one group being fed non-GMO feed the other fed on GMO feed.  The one sentence conclusion of the study the indicate that “Pigs fed a GMO diet exhibit heavier uteri (25% heavier) and a higher rate of severe stomach inflammation (32% vs.12%) than pigs fed on comparable non-GMO diet.” However, reviewing the data reveals a very different picture.

The data show that there were no differences in food intake, mortality, nature and number of illnesses and veterinary interventions between the two groups.  Final weights and overall health of the pigs in both groups were within normal range. Tables 5 and 6 demonstrate that blood analysis of the two groups were virtually identical for blood chemistries and electrolytes.

Table 3 is particularly interesting—except for severe stomach inflammation, all the other pathologies observed would indicate that GMO fed pigs actually appeared healthier than non-GMO fed pigs!  In the same table many more pigs fed on non-GMO feed had stomach inflammation (from nil to severe) than did the GMO fed group (79 vs 72 respectively).   The uterine weight differences might be significant, but whether or not there would be an effect on reproduction cannot be ascertained from these results. Gross pathologies upon observation alone do not necessarily equate into reduced functionality. 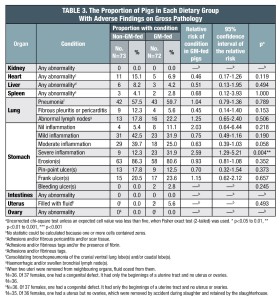 The manuscript is fraught with misrepresentation of the results. The overall conclusions of the authors appear to support an anti-GMO ideological position as opposed to what their own data demonstrates.

This research does not demonstrate any significant deleterious effects from feeding pigs GM food.  If taken in total, one might draw the conclusion from this study that the GM fed pigs fared just as well as the non-GMO fed pigs.