Do People Who Eat Fast Food Have Higher Levels of Phthalates? 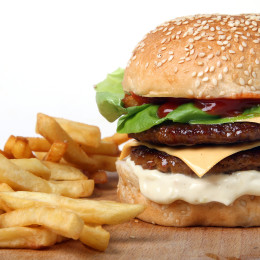 You may have seen the headlines, “If You’re Eating Fast Food, You’re Probably Also Eating Phthalates.” A new study published today in Environmental Health Perspectives finds that teens and adults who reported eating more “fast food” had slightly higher levels of two types of phthalates in a urine test. But before you start to worry about the safety of your burrito or burger, let’s break down the study further.

Researchers from George Washington University looked at data from 8,877 participants who answered survey questions about their food intake in the last 24 hours, including whether they ate fast food. The same participants also provided the researchers with a single urine samples that the researchers examined for the breakdown product of three chemicals: DEHP and DiNP (two types of a chemical group known as phthalates) and Bisphenol A (BPA). All three chemicals are commonly used in food processing and handling.

But these findings don’t actually tell us much new information.

Though some participants who ate fast food had up to 40 percent higher levels of phthalate breakdown products in their urine, the actual amount of phthalate exposure was still extremely low for all groups. Both of the phthalates tested by researchers have been approved by U.S. and European regulators for use in many food packaging applications. Though the study’s authors point out a handful of studies linking DiNP and DEHP to health problems in laboratory animals, there has yet to be any research finding these chemicals cause any health problems in humans, particularly at the low levels humans are typically exposed to phthalates.

Researchers didn’t actually test the fast food the participants ate to determine whether phthalates were present. Individuals are exposed to phthalates from many different sources—that’s why there wasn’t much difference in the urine sample results of those who reported eating fast food and those who didn’t. We don’t know that the differences that researchers did find were caused by the consumption of fast food—that’s just the theory of the researchers.

The researchers rely on self-reported dietary data that is up to a decade old.

Self-reported data is notoriously unreliable, which you can read more about here. Additionally, the data used by researchers stretches back to as far as 2003, with the most recent data from 2010. It’s unclear what changes food manufacturers and restaurants have made in the past 6-13 years and whether phthalate exposure would be the same if those individuals were tested today.

We all know that eating more fresh fruits and vegetables and fewer packaged foods is better for our health. But there isn’t any reason to worry that the very low levels of chemicals you could be exposed to through food packaging pose a real threat to your health. You’d have to be exposed to extremely high levels of these chemicals before you’d have to seriously worry about health problems.