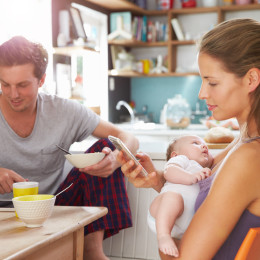 Most parents with babies check their cellphones from time-to-time. For many parents juggling careers, using their smartphone to keep up with work emails is essential. But is this behavior actually harming our children?

Probably not. The research cited by TIME’s article was based on study of stressed-out rats, and have you ever seen a rat with an iPhone?

Researchers at the University of California, Irvine placed some rats in a cage without adequate nesting material. This led their mothers to scramble around the cage, trying to find more materials for their pups. This distraction meant those mothers weren’t giving as much attention to their offspring. As these young rats grew up, researchers found the rats with distracted mothers showed less pleasure, which in rat terms means they ate less of a sugar solution and played less with other rats.

The researchers found that these rats and rats in a control group (rats raised by a mother with adequate nesting material) spent the same amount of time with their mothers. However, since the rats in the distracted group showed “less pleasure” as they grew up, the researchers concluded it must have been the overall quality of maternal care that affected the rats development.

While mother rats distracted with the task of finding more nesting material for their children may not be great parents, this research doesn’t mean anything for parents looking at cellphones.

It’s baffling that researchers conclude cellphone distraction is most comparable to the rat scenario. If a parent has other things dividing his or her attention—caring for other children, cooking dinner, folding laundry, etc.—would it similarly affect the child?

Most importantly, rats are not people. Rats simply don’t mature emotionally in the same way as humans (at least not that we’ve discovered!) Comparing their developmental experiences to the multi-faceted upbringing of a child isn’t realistic.

New parents have enough to worry about. Scaring them with warnings based on preliminary animal research simply isn’t helpful.