Does ibuprofen make you infertile? 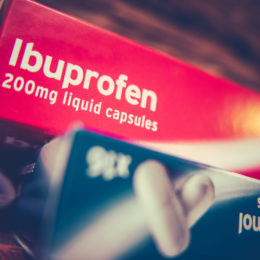 Millions of Americans utilize ibuprofen (the active ingredient in Motrin and Advil) to relieve pain from headaches, muscle aches, arthritis, and reduce fevers. But the question of its effect on male fertility circulated in the media early this year after a study found that men taking the maximum recommended dose of ibuprofen developed a hormonal imbalance. With evidence demonstrating that overall sperm counts are on the decline in Western countries (although reported levels are still above normal), male infertility is having its time in the spotlight, and no potential cause is off limits.

So what about ibuprofen?

For this study, only 14 men took ibuprofen. That small sample size alone should be enough to disregard the intensity of any conclusions drawn from the paper.

For example, if you flip a coin 14 times it should land face up 7 times by pure chance. But if it happens to land face up 8 times it doesn’t mean you have a loaded coin. Larger sample sizes help to weed out results that occur by chance, and get researchers closer to a study’s “true” result.

In this case, researchers were concerned because the average amount of luteinizing hormone (LH) measured in the participants blood rose during the 44-day study. Higher levels of LH could mean that the testes aren’t functioning properly.

But the amount of LH we’re talking about – a 33% increase – can still be in the normal LH range. “Normal” LH can fluctuate from 1.8 and 8.6 mIU/mL, and experts note that men have about 6 drops and surges in the hormone throughout the day. Additionally, sexual arousal can make LH levels spike. (And if participants are feeling suddenly pain-free after maxing out on painkillers for six weeks, that variable isn’t out of the question).

In short, study results aren’t always as they seem – especially when small sample sizes are involved. As long as people use ibuprofen responsibly and as the drug facts label instructs, the medication’s safety and efficacy has been well documented and supported by decades of scientific study and real-world use.

If you’re truly concerned about fertility, the Centers for Disease Control and Prevention has a number of tips: get tested for sexually transmitted infections, don’t smoke, don’t binge drink, maintain a healthy weight, and learn your family history.