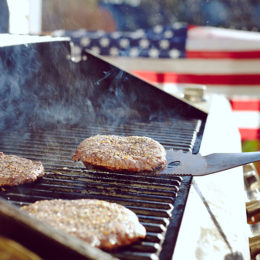 With headlines like “Red meat tied to higher risk of dying from many diseases” leading the way to Memorial Weekend, there’s no doubt that people are worried about firing up the grill.

But before you swear off the tri-tip and burgers, it may be helpful to put these claims in context.

Recent concern stems from a 2015 report by the International Agency for Research on Cancer (IARC), which called red meat “probably carcinogenic to humans.” But after professing cell phone use, coffee, and working at night cause cancer (even if only a single flawed study links the two), doctors around the globe are questioning the agency’s assessments.

For decades, scientists have debated the possible link between eating red meat and processed meats like bacon and sausage with colorectal cancer. About 5 percent of Americans – and about 6 percent of those who eat the highest amounts of processed and red meats – will develop colorectal cancer at some point in their lives. But it’s difficult for researchers to design and execute experiments to control the diets of thousands of study participants to test whether individual foods cause (or prevent) cancer. Instead, scientists must use surveys to look for patterns between existing food intake and health outcomes.

But if you were asked to recount the amount of meat you’ve consumed in the last month, you’d likely be unable to respond accurately. Most people aren’t aware what a serving means in relation to the steak slices in their barbeque kebabs, or the beef in their sloppy joes.

While these studies offer clues about the impact of certain foods on our health, they often overstate correlations. And one of the major tenants of scientific thought is that correlation does not mean two variables are related. After all, the divorce rate in Maine correlates with the amount of margarine Americans consume.

Rather than blaming margarine for marital problems, or burgers for cancer, it’s important to understand that your health is influenced by a wide variety of factors. A weekend of grilling is unlikely to change your cancer risk, but sustained obesity, lack of exercise, and a lifetime of too much fun in the sun can certainly carry an impact.

There are a lot of holes in our nutritional science knowledge, but we have a pretty good idea of what makes for a healthy diet—plenty of fruits and vegetables, proteins, and whole grains. Red meat is a great source of iron, protein, and a number of essential vitamins and nutrients. While we wouldn’t advise having a hotdog for every meal, there’s not enough evidence to warrant eliminating meat from your diet out of cancer worries.