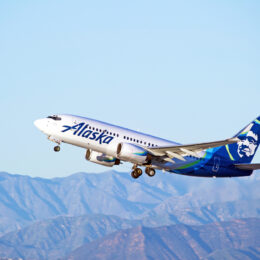 With a press release in hand, Alaska Airlines told the world that it was going to save the planet by banning the distribution of plastic water bottles on its flights and swapping them with boxed water.

The intention of this change was certainly to paint the airline as a green(er) operation, but a closer look shows this is nothing more than an attempt at greenwashing. Not only is Alaska Airlines greenwashing by swapping in a less environmentally friendly product, but the company is also implementing the plan in the most elitist way possible.

Cartons are not better for the planet, they just have better marketing. In reality, cartons are worse for the environment than the plastic bottle Alaska says it’s trying to replace.

Plastic bottles have been put on the chopping block based solely on the word of environmental activists who have made it a scapegoat for climate change.

The science, however, tells a different story. As far as greenhouse gas emissions are concerned, recycled PET bottles release a nearly identical amount of carbon according to a study commissioned by TetraPak, a carton manufacturer. There is no emissions savings by switching to cartons.

Cartons are also not as recyclable as plastic bottles. PET, the plastic resin water bottles are made from, is fully recyclable and accepted in most curbside recycling programs throughout the country. PET can be recycled into new bottles, or even products like carpets, furniture, and other goods. The same cannot be said for cartons.

The difficulty with cartons is they aren’t just cardboard–they are made from glued layers of paper, plastic, and aluminum. These layers are difficult to separate during the recycling process making it so cartons can only be “down-cycled” into paper or other low-value products like building insulation or incinerated. Most importantly, the thin aluminum in cartons is developed mostly by Chinese government-supported mines and smelters that create significant damage to the environment.

Luckily for the planet, Alaska Airlines isn’t giving this ban on plastic bottles its full effort. Only relatively few passengers flying first-class will be given cartons. The peasants in the back of the plane will still receive plastic bottles, though the airlines did note that cans and bottles on flights will be recycled. (The company admitted that cartons are only recyclable in “many areas,” unlike the cans and bottles that can be recycled anywhere.)

This greenwashing ploy is apparently created by people who pretend to care about the planet. In reality, it is probably too expensive a stunt to share with all passengers. A 24 pack of 16.9-ounce boxes costs $39.99 on Amazon while a 24 pack of standard bottles costs $3.99. Alaska is trying to have it both ways.

Alaska Airlines may not be helping the planet by the bait and switch on water containers, but it does give them a nice halo from the laughable reality of their environmental impact.  An Alaska Airlines flight from Washington D.C. to Seattle produces roughly 542 kilograms (nearly 1,200 pounds) of CO2. The production of one water bottle creates approximately 83 grams of CO2, or roughly 0.18 pounds per bottle. That single flight produces emissions equivalent to producing 6,600 PET bottles.

We think it’s a bit silly (and disingenuous) for Alaska to make a splash about its beverage cartons–especially when the replacements (cartons) are actually worse.

This is the seventh report in a series about companies “greenwashing” products to make them appear to be better for the environment than they actually are. You can read our other greenwashing reports here. Keep an eye on the Periodic Fabels blog for future updates to the series.