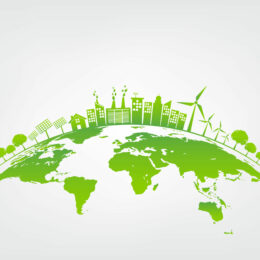 Earth Day was first celebrated in 1970 as a way to reflect on the beauty of the planet while also planning on how to best protect it. In the more than four decades that followed, individuals, corporations, and governments have all taken steps to reduce pollution and greenhouse gas emissions to better protect the planet.

Along the way, however, some myths have developed that must be dispelled. Here are six common environmental myths that belong in the trash:

Myth #1: All plastic can really be recycled.

Plastics numbered 3, 4, 6, and 7 can only be recycled in special facilities. These items include PVC pipes, sandwich bags, polystyrene foam take-out containers, and other random plastic items like CDs. Families should consult their municipal recycling program to see which plastic products can be recycled in their curbside program.

Myth #2: Organic crops are better for the environment.

Organic crops are often painted as being good for the environment, but they are far more harmful. Because organic crops are not treated with pesticides, they produce smaller yields and require more land than standard crops. All that land requires more fossil fuels to harvest than high-yield fields. The increased demand for land can also lead to deforestation. Additionally, organic crops have a shorter shelf life which can lead to food rotting and ending up in a landfill. Rotting food emits methane, one of the most potent greenhouse gasses. Oh, and organic agriculture does use its own class of organic pesticides–which can be more harmful than synthetic pesticides.

Myth #3: Glass is better for the environment than plastic.

In an effort to reduce waste, many stores and producers have stopped using plastic bottles in favor of glass. It may be well-intentioned, but it isn’t actually helping the planet. Glass requires much more energy to manufacture and transport than plastic. Glass is the worst packaging type when it comes to greenhouse gas emissions. One study from the Danish environmental agency found that recycled plastic is the best packaging option when it comes to greenhouse gas emissions.

There has been a long-lasting myth that pizza boxes cannot be recycled. The fact is that most curbside recycling programs can recycle pizza boxes that have slight grease stains. Just remember to remove any slices or stuck-on cheese from the box before tossing it in the bin.

Myth #5: Most of the Great Pacific Garbage Patch is straws and other single-use items from the United States.

The Great Pacific Garbage Patch is a floating mass of plastic twice the size of Texas floating roughly 100 miles off the coast of Hawaii. The garbage patch is often used as a talking point by those who wish to regulate single-use plastics, but the patch actually has very little consumer plastic. The vast majority of the plastic in the patch is abandoned fishing equipment.

Americans may use a lot of plastic, but very little of it ends up in the ocean. The United States is responsible for roughly 1 percent of all mismanaged ocean plastic. In fact, 93 percent of ocean plastic can be traced back to just 10 rivers. Eight of those rivers are in Asia and two are in Africa.

Myth #6: Nuclear power is bad for the planet.

Many environmentalists, especially those at Greenpeace, oppose nuclear energy and have promoted myths about the power source to discourage its use. But nuclear power is the only sustainable carbon-less energy source in the world right now. Solar and wind power may advance over time, but right now, massive wind and solar energy fields can barely power a few city blocks. Nuclear energy can power entire counties without emitting harmful greenhouse gasses. As researchers at Yale have noted, any serious plan to slow climate change must include nuclear energy.