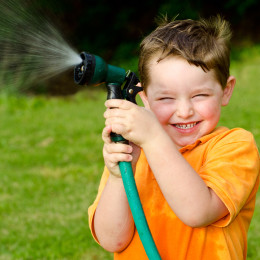 For activist groups whose currency is fear, they always need something new to scaremonger about. The sensationalist health risk tale du jour? Garden hoses are unsafe!

A report out of the Ecology Center has alleged that garden hoses contain all sorts of scary chemicals – including heavy metals and flame retardants.

But the “study” failed to adhere to the gold standard of scientific evaluation: the peer review. Without any outside authorities critiquing it for sound methodology, the report was published asserting some pretty egregious claims which aren’t reflected in the supporting data.

Since the researchers also conveniently omitted any control data from their tap water evaluation to compare all other measurements against – an element which is absolutely critical to every scientific study – we really don’t know if the presence of anything in this study is due to the water’s source, or the hoses it was fed through. This is more than a lack of due diligence – it is an intentional misrepresentation of data.

The latter concern becomes especially relevant when you realize that the Ecology Center is less than 40 miles from the counties serviced by the same water authority responsible for the Flint water crisis. If the study was conducted at the home of one of the Ecology Center’s employees, rather than in an on-site lab (which, again, we don’t know because they didn’t tell us), the purveyors of this “study” should be more concerned by their own zip code than by the hoses they buy at Home Depot.

In case that isn’t enough to convince you, let’s take a deeper look into some of the claims made by the report and those reporting on it:

So while the core of a 5-layer hose may contain lead, its exterior and innermost layers may be specifically designed to prevent the leeching of lead either into the water or onto a user’s skin.

2. Bromine and Phthalates and PVC, oh my!

Aside from the unsupported claim that bromine is “correlated with antimony” (In what context? Did the researchers test for the presence of both? Did they ignore the fact that antimony is naturally present in drinking water?), I wonder what the researchers would expect to find if they dug to the water lines feeding the sink in their own house. Oh yea, PVC.

Phthalates, the compounds which make plastic flexible, are present in PVC whether it is in your hose or the pipes feeding your indoor sink (and, might we add, the dose makes the poison and this dose just doesn’t cut it.)

3. But the Tin!
But wait, tin levels were as high as 4,000 ppm! That isn’t quite as terrifying when you realize that the Great Lakes, which supply most of Michigan with its water, have levels around 3,300 ppm. And since the researchers failed to include data to compare against, we’ll have to assume that it was hidden for a reason.

Fealty to the truth is the cornerstone of good science, and the Ecology Center has woefully missed the mark on this one.