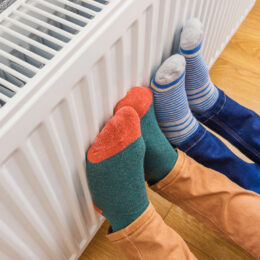 Thousands of families spent their holidays in the cold thanks to the misguided hatred of natural gas by an individual who authorities believe is an environmental activist.

Police said that an activist from the group Earth First! may have attacked natural gas pipelines in Aspen, Colorado, causing an outage that left thousands of families without heat and hot water.

Black Hills Energy, the company that provides natural gas to parts of Aspen, reported that more than 3,000 families were left to shiver in the cold for days because of an act of vandalism that prevented the flow of natural gas to homes as a source of heat and hot water. The company was forced to deploy 170 technicians to tend to the damage as they worked to seal toxic leaks and safely restore service.

Authorities found that natural gas pipelines had been tampered with in three separate locations as early as December 26. The flow of natural gas was not restored to many of those homes until New Year’s Eve.

Near the damaged pipes, the vandal had written “Earth First!”

A quick update on the Aspen gas outage:

Most occupied buildings should have gas service restored by tomorrow.

"Earth First!" graffitied at two sites, but law enforcement says no one with the group has taken credit for the vandalism. https://t.co/bjdkzcXGKX

Earth First! is an environmentalist group that precipitated out of the FBI-designated terrorist group Earth Liberation Front in 1979. Earth First! specialized in a practice it called “monkeywrenching.” The group would vandalize and damage equipment to prevent any project they believed could harm the environment. Its founder, Dave Foreman, wrote books about how to use destructive vandalism to stop new construction. He recommended destructive practices such as pouring sand into the gas tanks of bulldozers. Several members of Earth First! have spent time behind bars for crimes including assault and arson.

Authorities have not arrested the person or persons responsible for the damage, so it is not clear if the individual responsible is tied to Earth First! in any official capacity. One suspect police believe is responsible for the attack was photographed wearing “high end” clothes while walking away from the area where the crimes were committed.

The “high end” criminal is fortunate to have sported a thick winter coat, hat, and boots during the attack. If his home was left without heat because of the attack, he can afford the warm clothes. Other families may not have been so fortunate when the temperature dipped below 0 degrees after the attack cut off heat and hot water to thousands of homes.

With the amount of suffering that was caused, one would think natural gas must be terrible for the planet to provoke such an attack — but they would be wrong.

Because of the actions taken by the wealthy environmental vandal in Aspen, the city’s pipes needed to be purged of natural gas meaning that much of it was needlessly wasted and released into the air. Black Hills Electric dispersed 4,000 electric space heaters to help keep families from freezing. Those heaters were likely powered by electricity produced by coal.

The families in Aspen paid the price for the attacker’s misguided — and criminal — hatred of natural gas, a fuel source that has been vital in phasing out the use of coal to heat homes.

The individual responsible for the sabotage may have plenty of time to read about the environmental benefits of natural gas while behind bars, however.