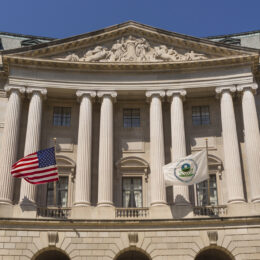 The Environmental Protection Agency announced that it would not be taking steps to further regulate the chemical perchlorate in American drinking water.

Perchlorate is a tap water contaminant that has been linked to brain damage in infants and developmental delays in young children. The chemical has been known to interfere with the thyroid gland’s ability to uptake iodide which can stunt the production of many hormones needed for proper brain development.

Despite being known to cause a measurable decrease in I.Q. points in newborns, the EPA declined to regulate the chemical because it does not appear in drinking water “with a frequency and at levels of public health concern.”

The debate over perchlorate has been ongoing since President George W. Bush’s administration first declined to regulate the chemical. That was reversed by his successor, President Barack Obama, whose administration issued a recommendation that 15 micrograms per liter was the maximum concentration of perchlorate that pregnant women or young children should ingest.

The decision was celebrated by Lockheed Martin, Aerojet Rocketdyne, and Northrop Grumman – three defense contractors who vocally opposed restricting the chemical. These companies, along with the Department of Defense, have opposed regulation of perchlorate since 2009, in part, because it is an ingredient in jet fuel. The chemical has been spotted in high concentrations near rocket test sites.

“We are extremely disappointed and think that it’s unscientific and unlawful to not regulate this contaminant that’s in millions of people’s drinking water,” one Natural Resources Defense Council spokesman told the New York Times. “They’re not following the best science.”

Perchlorate, which occurs naturally, has been spotted in high concentrations in at least 26 states. The American Academy of Pediatrics has called for the “strongest possible” limits on perchlorate. Some states have already bypassed the EPA to implement their own regulations on perchlorate, including California and Massachusetts.

Regulation of harmful chemicals is often only the first step. Maintaining a tap water supply that complies with all the regulations is where things become more difficult. To learn more about the chemicals that may be in your water, visit IsTapWaterSafe.com.