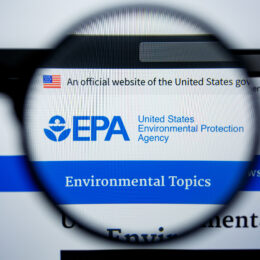 The Environmental Protection Agency this week finalized a rule making it more difficult for junk science to be the basis of federal regulations.

The new rule — titled “Strengthening Transparency in Pivotal Science Underlying Significant Regulatory Actions and Influential Scientific Information” — took effect on January 6. Under the rule, the EPA must disclose all underlying data used in scientific studies that influence environmental regulations in dose-response regulations, meaning any regulation that controls how much of a certain chemical to which the public can be exposed.

The rule also applies retroactively, meaning the data must be made public for regulations already in place. In the future, studies with transparent and reproducible data will be given greater consideration.

Prior to the rule’s implementation, the EPA did not need to disclose the underlying science used to influence regulations, which may have allowed extremely small or skewed data sets to determine federal regulations without pushback from members of the scientific community who could debunk the flimsy data.

Nearly one million people participated in the public comment phase of the rule finalization, highlighting the contentious nature of the rule.

Those who opposed the new rule argued that it could hinder new regulations from being put into place to protect the public health because some medical data was collected under confidentiality agreements. Activist groups like the Union of Concerned Scientists maintained that they were not against transparency, per se, but that it was not possible for some data to be made public.

“Our response was that we are in favor of transparency applying to academia and industry, but not if the requirements limit EPA’s use of studies for which that level of transparency is not possible,” the group stated.

Those who supported the bill argued that the added transparency will help Americans to understand how other regulations are put in place and allow them more information to counter new rules if the proposals are based on weak data points. During a hearing on the rule, EPA Administrator Andrew Wheeler argued that sound data should not need to be hidden.

“We are committed to the highest quality science,” Wheeler said in September. “Good science is science that can be replicated and independently validated, science that can hold up to scrutiny. That is why we’re moving forward to ensure that the science supporting agency decisions is transparent and available for evaluation by the public and stakeholders.”

In an op-ed published in January, he added, “If the American people are to be regulated by interpretation of these scientific studies, they deserve to scrutinize the data as part of the scientific process and American self-government.”

In the end, transparency won.

This rule change is a win for communities and businesses that have been forced to comply with regulations based on scientific data they could not challenge. Moving forward, individuals impacted by regulations will be able to review the data for themselves and make the case that the regulation should be overturned because it was based on junk science.

As with most government actions, transparency is the best policy.