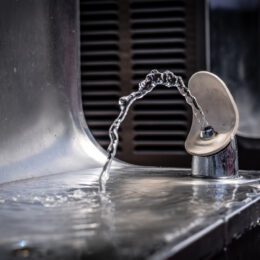 It has been known for generations that over-exposure to lead can lead to bad health consequences, but a new study has shown that it can also lead to bad behaviors, too.

A new study published in Proceedings of the National Academy of Sciences revealed that consumption of lead-contaminated tap water by a child before age six resulted in a 21 percent higher likelihood that the teen will be reported for delinquent behavior after age 14. The chances that a teen would participate in serious crimes, such as misdemeanor assault or felony property or weapons offenses, increased by 38 percent.

Jackie MacDonald Gibson, the lead author of the study and chair of the Department of Environmental and Occupational Health at the IU School of Public Health-Bloomington, stated the study’s findings further confirmed that early exposure to lead-contaminated water can result in a lifetime of setbacks. Lead is a neurotoxin.

“We know that lead exposure early in life has been linked to lower IQ, reduced lifetime earnings and an increased risk for behavioral problems and criminal activity,” Gibson said. “This research highlights the need to recognize the risks to children relying on private well water and for new programs to ensure they have access to clean drinking water. Failing to do so imposes burdens not just on the affected children and their families but also on society at large.”

The recent infrastructure package that Congress passed into law in 2021 included funding to replace lead pipes throughout the United States, but only $15 billion was allocated to the cause. Experts estimate that replacing all lead pipes would cost around $60 billion.