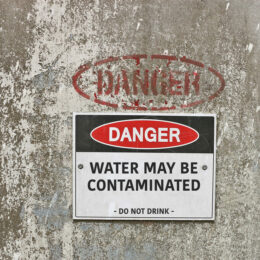 American families put a lot of trust in the government to keep their drinking water pure. But in at least three states, the government has been directly responsible for polluting the tap water.

Within the past few weeks, military bases in Iowa, Florida, and Hawaii have all had chemical spills that resulted in contaminated drinking water for military members and families living near the base.

In Sioux City, Iowa, an investigation revealed that an Iowa Air National Guard base was the source of the PFAS contamination. Sometimes referred to as “forever chemicals,” PFAS are chemicals commonly found in the production of non-stick products like Teflon and have been tied to cancers and other health risks. The city reported a PFAS reading of 8,610 parts per trillion at the base. The federal government requires a public disclosure for any PFAS detection above 70 parts per trillion.

There isn’t a factory in the area, so investigators turned to the base. They found that there were PFAS in the solution used in firefighting on the base.

PFAS are difficult to clean out of a water supply. Most municipalities are not equipped with the proper purification tools needed to clean the water. As for the people in Sioux City, local water treatment facilities have said they intend to continue testing for PFAS to ensure the current contamination levels do not increase.

In Pensacola, Florida, the same problem was spotted. An investigation that started in 2019 finally concluded with the discovery that the National Air Station Pensacola was the main source of PFAS in the city’s water. The Navy announced the findings to local homeowners.

In Hawaii, it wasn’t PFAS contamination that tainted the water. Instead, jet fuel leaked from a U.S. Navy base into an aquifer that supplies about 20% of Honolulu’s drinking water. According to the state’s health department, initial readings detected petroleum levels 350 times what is considered safe in drinking water. The oil spill resulted in more than 3,000 displaced military members and their families.

Many families were outraged by the lack of transparency from the government during the initial days of the leak. At least 1,000 households and two schools had reported a gasoline-like smell coming from the water as early as November. Others reported digestive problems they believed were tied to the contamination.

In each of these instances, the government failed to keep the tap water safe. Families deserve transparency in their tap water purity.