Feed Your Brain with Fish 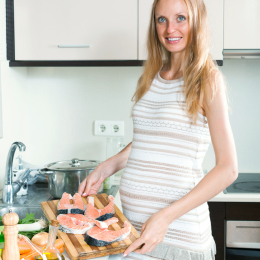 It’s pretty easy to scare Americans away from eating healthy foods—even when the U.S. Food and Drug Administration (FDA) says those foods are perfectly safe. We’ve seen various activists and crackpots needlessly scare the public into cutting their consumption of healthy diet staples such as apples, fluoridated water, fish, and countless others.

The fear is understandable—no parent wants to feed their children food that might harm them! But what happens when overblown fears stop pregnant women from getting the nutrients they need to nourish smart, healthy babies?

This is precisely what’s happened with fish. For many years, environmental groups such as the Natural Resources Defense Council and Environmental Working Group breathlessly warned Americans, and especially pregnant and nursing women, not to eat too much fish because of possible mercury and PCB contamination. Even though many researchers across the globe have concluded that the benefits of eating fish far outweigh the possible risks, their pleas worked—fish consumption plummeted.

Fish is a lean source of protein and contains lots of omega-3 fatty acids, which are considered essential for brain growth. Earlier this year, the FDA issued a report that found that pregnant and nursing women were not consuming enough fish, resulting in an adverse impact on their children’s IQ. To encourage more fish consumption, the agency released a draft guidance to encourage women who are pregnant, might become pregnant, are breastfeeding, or feed young children to consume 2 to 3 servings of fish per week.

The recommendations aren’t final yet—and environmental groups are urging the FDA to rethink its recommendations, even encouraging pregnant women to avoid all tuna. The FDA certainly isn’t dismissing concerns about mercury in fish; the agency has provided a helpful list of fish with high levels of mercury that pregnant women should avoid. Overall, the science is clear: fish is an important part of a healthy diet and no matter what scary “reports” environmental groups release, you shouldn’t eliminate fish from your diet.