For Cancer Control Month, Exercise to Reduce Your Risk 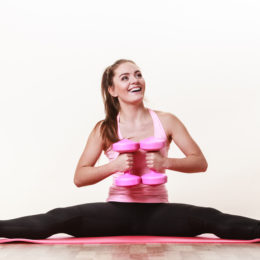 The President recently designated this April as Cancer Control Month, so we’re going on a blog-a-palooza with biweekly tips and myth-busting messages to raise awareness about scientifically sound ways to prevent cancer.

Diets often comes under fire for carcinogenic potential, especially when groups like the International Agency for Research on Cancer (IARC) claim that bacon and bologna will give you cancer. To understand why they make these claims, and have confidence knowing your ballpark frank won’t give you cancer, it’s important to understand the limitations of nutrition science.

Much of the research in this field relies on surveys. It can be incredibly difficult to gather accurate consumption data when we have no idea the weight of the pepperoni on our pizza or roast beef on our sandwiches.

But all is not lost! Research does consistently points to physical activity as one of the strongest lifestyle-related cancer deterrents. One particularly good study conducted a randomized trial where breast cancer patients either underwent typical care, or participated in supervised exercise during chemotherapy. The difference in disease-free survival and breast cancer recurrence were significant enough for the authors to support advancing the combination of “chemotherapy and exercise” to the next stage of clinical trials.

Dr. Joseph Perrone recently wrote a letter that appeared in several newspapers across the country, discussing the benefits of exercise and dispelling the myth that diet is the biggest predictor of cancer. You can read it below:

This year’s annual cancer report held promising news: more and more Americans are surviving their cancer diagnoses, thanks to advancement in research, prevention, and early detection.

Still, with more than 1.6 million diagnoses anticipated this year, we have room to improve. With President Trump designating this April as “Cancer Control Month,” there’s no time like the present.

Research indicates a substantial proportion of cancers might be prevented with lifestyle changes. While activists and celebrities try to woo consumers with organic juice diets and stainless steel bottles, the key to prevention is likely a lot less trendy.

Research indicates that physical activity is the strongest deterrent of breast cancer recurrence. Patients who exercise at least 2.5 hours each week are 40 percent more likely to stay in remission. Evidence also suggests the tangential effect of reducing obesity decreases one’s risk of eight of the fourteen most common cancers.

That’s no reason to chuck the broccoli, but it does indicate that the foods most often blamed for cancer can be part of a healthy lifestyle – which includes exercise.

It can be difficult to navigate conflicting information about cancer. Ensure your prevention strategies are scientifically sound by talking to your doctor, and leaving the celebrity endorsements to Hollywood.