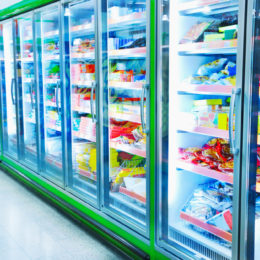 As more cities head for coronavirus lockdowns, many COVID-conscious shoppers are stocking up on frozen foods so they can minimize their trips to the grocery store.

This grocery shopping trend has sent frozen food sales through the roof with seven in ten shoppers increasing the amount of frozen food they have bought since the pandemic began. The spike in sales is a change of pace for the frozen food industry which has suffered from a misleading perception that foods in the freezer section are less healthy or fresh than other foods.

Samantha Cassetty, a New York-based registered dietitian, told Today that frozen meats, vegetables, and fruits are as nutritious as any other produce or meat in the store.

“Like all frozen veggies, they’re prepped, washed and ready to cook from the bag, and they’re just as nutritious as fresh produce,” Cassetty explained.

Frozen fruits and veggies are as fresh and nutritious as other products and, in some cases, frozen foods can be fresher than unfrozen foods because of the process of flash freezing.

Flash freezing occurs when an item is hit with air circulating at extremely low temperatures. This allows the meat, fruit, or vegetables to quickly harden and freeze without losing its juice. Flash freezing is different from buying an item and freezing it at home because standard household freezers are designed to keep items frozen, not to freeze items.

The slow process of freezing food in the freezer allows ice crystals to form which can break apart the food’s fibers and allow the juices to leak out in the thawing process. Slow freezing also causes foods to freeze together while flash freezing leaves the items separated. For example, berries bought off the shelf and frozen at home harden into one lump while flash-frozen berries can be taken out of the freezer individually, allowing the consumer to take exactly what they need rather than thawing the whole lump and wasting half of it.

Flash freezing allows foods to be frozen within hours of being harvested. Instead of sitting around in storage facilities and waiting to be hauled to a store like standard produce, flash-frozen foods are preserved at their moment of peak-ripeness and can be stored until the consumer is ready to use the product.

Foods that are not frozen often require added preservatives like sodium to stay fresh for consumption, yet frozen foods are criticized for being “processed.”

Dariush Mozaffarian, the dean of Tufts University’s Friedman School of Nutrition Science and Policy, told The Atlantic that many critics make the false assumption that “processed” foods cannot be fresh.

The coronavirus pandemic has caused many lifestyle changes that may be concerning, but the change in Americans buying more frozen foods is not cause for concern.