GMO vs. Non-GMO Oils: Is there a difference? 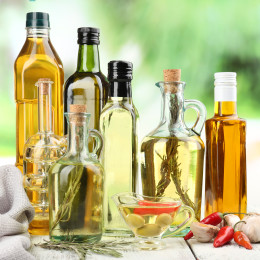 According to blogger Vani Hari aka the “Food Babe,” one of the 10 items you should NEVER purchase in a grocery store is GMO oils. In fact, she says “It’s super easy to whip up a vinaigrette at home to avoid dumping GMO soybean oils all over your healthy salad.”

Homemade salad dressings are great, but Hari neglects to tell her readers a key fact: oils made from genetically modified ingredients aren’t actually any different from non-GMO oils.

Most cooking oils—think canola, olive, soybean, corn etc.—are processed and refined to such a degree that all plant DNA and protein is destroyed. Genetically modified or not, these types of oils all end up with the same chemical structure.

Hari has made it clear on her blog that she is NOT a nutritionist—she’s a public speaker and blogger. So maybe we shouldn’t be surprised she’s stirring up fears over oils that are essentially no different from non-GMO oils.

Her blog has a history of making ridiculous claims about GMOs, including the sensationalist idea that GMOs have caused Indian farmers to commit suicide. It’s a bold claim…without any evidence! The study she cites to support her claim actually says: “Small scale farmers who cultivate capital-intensive cash crops — which are subject to massive price fluctuations — are particularly vulnerable to accruing debts they can’t repay. Many male farmers — who are traditionally responsible for a household’s economic well-being — resort to suicide because they can’t support their families.” GMOs are not the culprit.

Anti-GMO activists can’t prove that GMOs have any negative health effects (over 2,000 studies show they’re safe) or use more pesticides (actually they use less) so they’ve resorted to ridiculous claims to push for their ban. Who knows what ridiculous claim they’ll make about GMOs next.