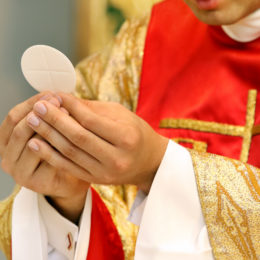 As Catholics head to mass this morning, they have something new to celebrate. Last week, the Vatican stood on the side of science when it clarified that bread made from genetically modified products would be acceptable for communion.

Although genetically modified wheat (in the sense that individual genes are inserted, removed, or duplicated) isn’t commercially available yet, humans have a long history of modifying grains to suit our needs.

Bread wheat was created from a hybridization between goat grass and cultivated wheat roughly 8,000 years ago. Early farmers bred the strongest, most high-yielding of their plants in order to produce successive generations of high-performing wheat. In the 20th century, Soviet scientists also bred spring wheat to resist winter frost.

The absence of commercially available GM wheat certainly doesn’t mean science has lost interest in the crop. A global effort succeeded in sequencing the wheat genome in 2012, and more than a decade ago, Egyptian researchers showed that by transferring a single gene from barley to wheat, their plants could tolerate severe drought. This type of genetic engineering is especially important, since more than a third of the world’s population is dependent on wheat for survival.

While the Catholic Church joins the scientific community in acknowledging that genetic modification isn’t bad by nature, anti-GMO activists might want to take this moment to repent.