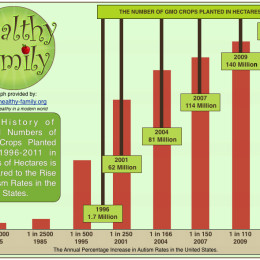 Recently, I came across one of the most outrageous examples of researchers misrepresenting correlation (an association between two or more variables) for causation (an action that causes an effect). Essentially, the “study” attempted to present evidence linking the recent rise in autism diagnoses with the increase in hectares (10,000 square meters) planted containing genetically modified crops. What struck me though was this graph: 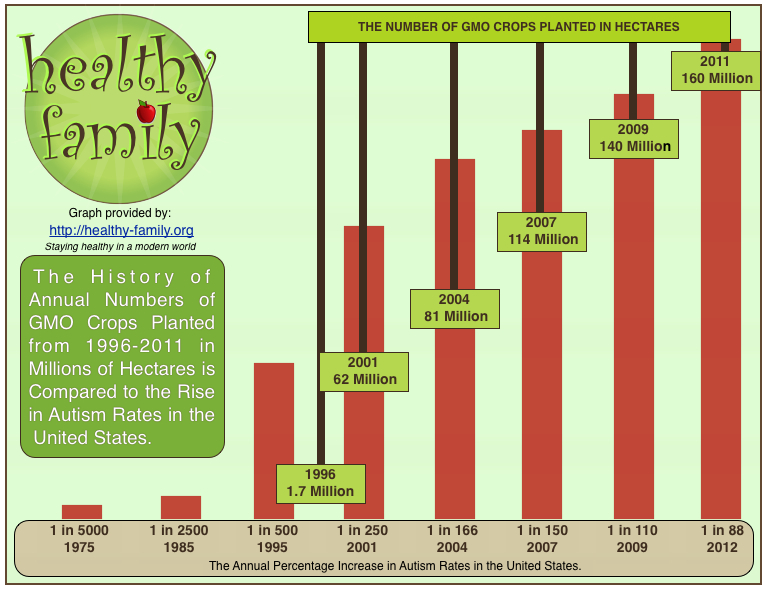 Presented in such a way, it seems to show compelling evidence to a casual observer that genetically modified foods could be somehow linked to increasing autism rates. This got me thinking—what else has coincided with the increase in planting of GMO foods?

I turned to a recent talk given by Claudia L. Satizabal, Ph.D., of the Boston University School of Medicine at the Alzheimer’s Association International Conference in Copenhagen. Dr. Satizabal presented data from the Framingham Study (a long-term health study of individuals from Framingham, MA) suggesting that incidences of dementia have declined since 1978. Essentially, researchers grouped patients into age groups every five years beginning in 1978—groups they called epochs—and looked at new cases of dementia in people 60 years and older. The researchers found a sharp decline in dementia rates, as you can see in the graph below:

So we can do exactly what the activists at Healthy Family did and make our own graph showing that instances of dementia have declined as we’ve planted more genetically modified crops:

Does this mean that genetically modified foods decrease dementia? Of course not!

We can take any disease on the rise or decline and plot it against just about anything and see a trend. These two hypotheses present a consistent problem in understanding information. The distinction between correlation and causation. Simply put, there may be a correlation (an association) here for both effects but to prove that they are being caused by an increase in GMO crops is a very big leap of faith. The take home message is to be skeptical of charts, graphs and interpretations of information. After all, as Disraeli said, there are three kinds of lies: lies, damned lies, and statistics.