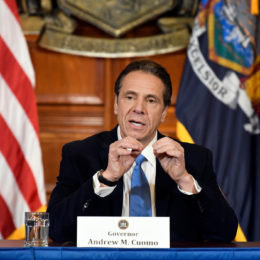 The governors of two of the most populous states in the union have cast doubts about the integrity of the Food and Drug Administration’s approval process for the forthcoming COVID-19 vaccine.

California Gov. Gavin Newsom announced on Monday that he would be establishing a commission in California to review each vaccine’s safety after the FDA approves the first vaccine. He told reporters that his state “won’t take anyone’s word” for the safety of the vaccine — even if that “anyone” is the highly respected, career medical professionals at the FDA.

New York Gov. Andrew Cuomo similarly cast doubts about the veracity of the FDA’s approval process. He told ABC News on Sunday that he was “not confident” in the safety of pending COVID-19 vaccines.

“You’re going to say to the American people, ‘Now here’s a vaccine. It was new. It was done quickly. But trust this federal administration and their health administration that it’s safe and we’re not 100% sure of the consequences?’ I think it’s going to be a very skeptical American public about taking the vaccine, and they should be,” Cuomo said.

“You’re going to need someone other than this FDA and this CDC saying it’s safe,” he later added.

Gov. @andrewcuomo: Americans “should be” skeptical of any Covid vaccine the CDC/FDA clear for use pic.twitter.com/yBkVsXIOWn

Cuomo also vowed to establish a commission to review the vaccine after the federal government approves it because he believes the FDA “doesn’t have any credibility.”

Newsom — and especially Cuomo — are walking a fine line by casting doubts on the validity of medications researched and approved by institutions like the FDA and the CDC. The two governors risk discrediting all of the approved and recommended vaccines that keep Americans safe, including the annual flu shot which was also approved under this administration.

The political feuds between President Donald Trump and Democratic leaders like Cuomo and Newsom have not been a secret. The two sides have strong disagreements about the right way to respond to the coronavirus pandemic, but both sides must be cautious not to attack the foundation of the scientific community.

Many of the professionals inside the FDA and CDC have been there for their entire careers. Dr. Anthony Fauci, for example, has led the National Institute of Allergy and Infectious Diseases under every presidential administration since Ronald Reagan was in office. He and his colleagues should not have their credibility questioned because of the disagreements between the two political parties.

With prominent Democrats showing distrust in the vaccine, distrust will likely rise across the board. Elected officials must not let partisan spats overshadow the good work that scientists are doing to keep us safe. There is no greater gift politicians could give to the anti-vaccine movement than to discredit the legitimacy of the institutions that have approved all other vaccines.