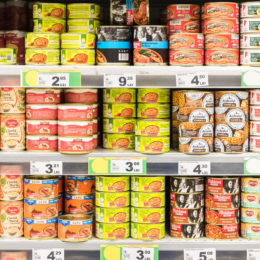 Few chemicals get as bad a reputation as bisphenol A, or BPA. Just this week, headlines pushed by a new report from activist group Center for Environmental Health warned that “Canned food still contains toxin BPA.”

Most metal cans are lined with a thin interior coating that contains BPA in order to protect them from corrosion, thereby preventing dissolved metals and deadly bacteria from contaminating your food.

It’s also without question that technologies like BPA (along with safe food handling practices) are responsible for keeping harmful bacteria out of the cans we buy in the grocery store. That’s why, if we peel back the layers of hysteria lumped onto the Center for Environmental Health’s report, it’s true that major grocers do sell cans protected by BPA or an equivalent substitute.

But activist groups have decided that weak evidence linking BPA to reproductive and other health problems is enough to forego its benefits. In reality, BPA poses no threat to human health.

The fears stem from studies showing that rats injected with extremely high doses of BPA have disrupted hormone activity. But as an endocrine researcher wrote in the journal Toxicological Science, BPA’s ability to mimic the human hormone estrogen is “so weak that even at levels of exposure 4000-fold higher than the maximum exposure of humans in the general population there are no discernible adverse effects.”

Some also worry that low doses of BPA causes reptiles to exhibit characteristics of the opposite sex. But before applying these results directly to humans, we have to realize that animal biology isn’t always applicable to our own. After all, temperature – not genes – determines whether many reptiles, like turtles and crocodiles, will be male or female. Perhaps comparing the reproductive effects between our species doesn’t yield the most accurate results.

In reality, the U.S. government has spent more than $100 million researching the safety of BPA in humans. And scientists with both the U.S. Food and Drug Administration and European Food Safety Authority have confirmed that normal exposure to BPA poses no risk to human health.

While the science supporting BPA’s safety is clear, continuing to scare the public about its “dangers” is both unnecessary and irresponsible.