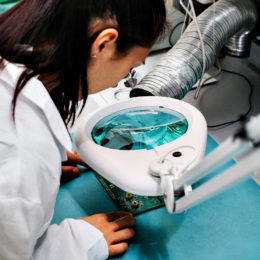 Nanotechnology may still sound more fiction than science, but innovations with really (really, really) small particles are already impacting the world today. So on October 9th, the National Nanotechnology Initiative celebrates 10-9, which is the scientific notation for all things nano-sized. For an idea of how small a “nanometer” is, it’s one billionth of a meter, or roughly the length of one molecule of sugar. But how can something so small make such a big impact on daily life?

Consider titanium dioxide, a naturally occurring mineral compound that’s so bright white it’s used to lend pigmentation and brilliance to everything from paints and paper to cosmetics and foods. You would need almost twice as much calcium phosphate or silica dioxide, two other mineral whiteners, to reach the same level of bright whiteness that titanium dioxide produces. Conveniently, titanium dioxide is also able to block the sun’s damaging UV rays, which make the mineral an all-star when it comes to sunscreens and food packaging.

However, when titanium dioxide is ground into a superfine, nano-sized powder, it becomes invisible. Instead of turning products white, nanoparticles of titanium dioxide are often used to harness the power of light.

Even though the particles are mere billionths of a meter long, they’re still able to block UV rays. So when nanoparticles are used to make sunscreens, they lend broad-spectrum protection without leaving an annoying white residue. They’re also used as a UV-blocking coat on glass windows.

Recently, nanoengineers at the University of California San Diego used the tiny particles in a “micromotor,” which they successfully used to fight a bacterial infection in lab mice with pinpoint accuracy.

Nanotechnology also offers a promising prospect for environmentally-friendly construction. Nano-sized titanium dioxide is able to scrub pollutants from the air, making them an especially favored ingredient for pollution-grabbing paint. Scientists in India have even developed self-cleaning denim using nanoparticle titanium dioxide (yet another win for invisible nanoparticles – white wash denim is so 1980).

So on National Nanotechnology Day, take a moment to appreciate the advancements in really small science.