Home  ⁄  Periodic Fables  ⁄  Uncategorized  ⁄  Has Science Confirmed the Existence of the…

Has Science Confirmed the Existence of the ‘Dad Bod’? 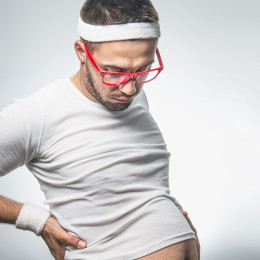 Earlier this year a blog post went viral describing the “Dad Bod”—a physique that boasts a “nice balance between a beer gut and working out” that women allegedly prefer over rock hard abs and bulging biceps. Now, a new study is being touted by the media as “proof” “the ‘Dad Bod’ exists.”

The study examines the link between fatherhood and men’s body mass index (BMI) and looked at a 20-year longitudinal analysis of 10,253 men beginning in 1994. The authors found that once men became fathers, BMI increased—whether the fathers lived with their children or not. Meanwhile men who were not fathers actually showed a decrease in BMI over the same period. Men who lived with their children had the largest increases in BMI—though overall the increase is not very large.

While the study didn’t look at whether this increase in BMI is attractive to females, it does suggest that the lifestyle changes fatherhood brings do have an impact on BMI. The study also found that married men had larger increases in BMI, adding more questions to the debate over the impact of marriage on men’s health.

As with any study, there are limitations. BMI isn’t always a great indicator of obesity and overall health and in this study, the first set of BMI data was self-reported by study participants, meaning it may not be accurate. The study also only looked at the impact of fatherhood in men’s 20s and 30s and did not follow trends further into their lifespans.

It’s an interesting first look at the impact fatherhood may have on men’s waistlines, but there’s still plenty of more research to be done. Until then, dads should take solace in the fact that at least a handful of vocal women are into those beer bellies.