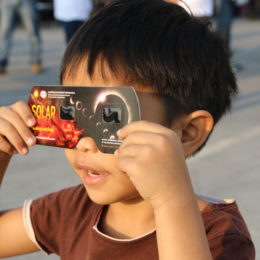 In just a few hours, Americans will witness the first total solar eclipse to touch coast-to-coast in almost 100 years.

If reactions to past galactic news are any indication, for a brief few days, interest in science and technology will spike. After all, how often does the average person find themselves wondering how NASA calculates the path of an eclipse years in advance, or what makes solar eclipse sunglasses so darn special? (Spoiler: many lenses reduce the intensity of visible light and UV rays using black polymer, a flexible resin infused with carbon particles. Score 1 for chemistry.)

But it shouldn’t take a once-in-a-century event to pique peoples’ interest – and trust – in science.

Remember the summer’s biggest story about chemicals in macaroni and cheese? The New York Times sparked a media frenzy claiming that America’s favorite blue boxes contained “phthalates.” Without much context, subsequent reports warned that parents were unknowingly poisoning their kids with industrial chemicals. After all, any substance with a name so devilishly difficult to pronounce must be dangerous, right?

While there are many different types of phthalates, as a general rule, they prevent plastics from becoming brittle and shattering. Whether they keep the plastic insulating your backyard string lights strong and bendable, or prevent manufacturing devices from breaking off into your box of macaroni, phthalates exist to keep us safe.

And while phthalates are able to get into some high-fat foods, they do so at such low levels it should be a non-story. In reality, you would need to consume about 4.6 million boxes of macaroni and cheese before you’d eat enough phthalates to begin impacting your health.

It’s an unfortunate situation that media reports often sensationalize science to scare viewers and drive a story. Just because something is a chemical doesn’t mean it’s dangerous. In reality, everything is made of chemicals. Water, our own DNA, glass, plastic – you name it!

So while you put on your eclipse glasses today, take a moment to appreciate the technology and advancements in chemistry – like suspending molecules in a thin resin – which keep your eyes safe from overexposure to the sun.