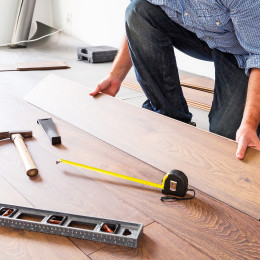 Who do you trust to tell you whether the products you buy are safe? Bloggers like the Food Babe who crow about “yoga mat” chemicals in bread? Or federal environmental and health regulators who review scientific research and determine which products are safe for consumers?

According to a recent ORC poll commissioned by the Center for Accountability in Science, respondents overwhelmingly placed the most faith in federal health and environmental regulatory agencies–ahead of environmental advocacy groups, university scientists, and the news media. But government agencies aren’t always good arbiters of sound science, either.

Last year, “60 Minutes” broke a shocking story: Lumber Liquidators, a discount flooring chain, was selling Chinese-manufactured laminate flooring containing the chemical formaldehyde in levels well above those allowed by law. At high levels, formaldehyde can cause irritation of the eyes, noses, and throats in many people–symptoms experienced by many of the home owners interviewed by CBS.

Based on these findings, the federal government started to take action. The Consumer Product Safety Commission, a federal agency that regulates the sale of consumer products, took samples from the same flooring as “60 Minutes” and performed their own testing. The agency then turned the results over to the Centers for Disease Control. However, instead of confirming “60 Minutes'” warning to consumers, early last month the CDC announced the company’s flooring posed only minimum health risks.

Why the discrepancy? It turns out the CDC made a key math error, mixing up feet and meters in its calculations. After correcting the error, the agency found formaldehyde exposure from Lumber Liquidators’ flooring is three times higher than the CDC originally calculated (though the risk of cancer from the flooring remains very low). In this case, the media was right and the government was wrong.

Unfortunately, this isn’t the first time a key federal agency made a major blunder on formaldehyde.
After a dozen years of work, in 2010 the U.S. Environmental Protection Agencyreleased its long-awaited review of formaldehyde’s safety. In the report, the EPA concluded formaldehyde probably causes leukemia, respiratory cancers, and additional health problems such as asthma.

Formaldehyde is everywhere–it’s used in products from flooring to paper towels to nail polish to automobiles–so the EPA’s finding was concerning. But it turns out the EPA majorly botched its formaldehyde study.

The National Academy of Sciences, a nonprofit comprised of the U.S.’s leading scientific researchers, was asked to review the EPA’s report and issued a harsh rebuke.

NAS found that not only did the scientific evidence fail to support EPA’s conclusion that formaldehyde is a probable human carcinogen, but the methodology the EPA followed to create its review had serious flaws. According to NAS: “Overall, the committee found that EPA’s draft assessment was not prepared in a logically consistent fashion… and does not sufficiently document methods and criteria used to identify evidence for selecting and evaluating studies.”

It’s been five years since the NAS released its report criticizing the EPA’s process, but the agency hasn’t done much to improve the process it uses to weigh scientific evidence about chemical safety.

The EPA still hasn’t established a standard method for identifying scientific studies and a formal process for reviewing and integrating research on chemical toxicity. A recent report by the EPA’s Chemical Assessment Advisory Committee (the committee formed to implement NAS’s recommendations), warned: “further development is needed in establishing standard practices for abstracting relevant data, for evaluating study quality, strengths and shortcomings, and for integration of evidence across studies.”

Very few Americans want to read 1,000 plus page reports from the EPA’s Integrated Risk Information System (IRIS) Program–they’re wonky, technical, and don’t mean much to non-scientists. But Americans do want to know that the EPA and other federal agencies are using a standard, science-based procedure to evaluate all the available research about chemicals we’re exposed to on a daily basis.

Americans may trust federal agencies more than advocacy groups and the news media, but that won’t last forever if the government keeps falling short. It’s time for Congress to pressure the EPA to bring its scientific procedures up to speed, and ensure that the agency’s regulations are based on the best available science.