How Much Money Did Your State Lose to California’s Cancer Labeling Law? Read the Report. 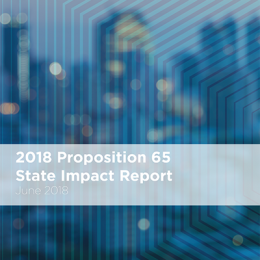 The Center for Accountability in Science is proud to announce the release of the 2018 Proposition 65 State Impact Report, a first of its kind overview ranking states by how much money local businesses lost settling Proposition 65 lawsuits.

Although we’ve been writing about the harms of Proposition 65 for some time, the California law recently caught national attention for requiring cancer warnings on coffee despite firm scientific consensus that coffee does not cause cancer in humans. Apparently, unjustifiable cancer warnings on one of the world’s most heavily consumed beverages was the catalyst consumers needed to understand exactly how flawed Proposition 65 truly is.

Until now, there hasn’t been much evidence to prove that Proposition 65 isn’t just a California problem. The 2018 Proposition 65 State Impact Report and accompanying state-specific rank pages aims to fill this gap.

It appears this report has come just in time, since both chambers of Congress introduced a bipartisan bill called the Accurate Labels Act, which would make sure warning labels like those required by Proposition 65 are risk-based and grounded in scientific research. As one of the bill’s sponsors, Rep. Kurt Schrader (D-OR), notes: “When we have mandatory cancer warnings on a cup of coffee, something has gone seriously wrong with the process.”

There are serious flaws in Proposition 65’s implementation. We hope the Accurate Labels Act can properly fix them.

If you want to learn more about why Proposition 65 requires warnings on items that won’t give you cancer (and how much money local businesses lose in the process), you can read the whopping 39-page Proposition 65 State Impact Report here, and see how your state ranked here.