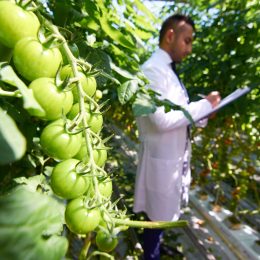 One great advantage of scientific knowledge is its elasticity. Through careful input, observation, and an abundance of consistent findings, accepted truths can change. For many of us though, changing an opinion even in the face of overwhelming evidence is just plain difficult.

Today, we’re taking a moment to celebrate Mark Lynas. The onetime anti-GMO activist reversed course in response to years of mounting evidence and a clear scientific consensus that agricultural biotechnology is safe. Last week, Lynas authored an essay in the Wall Street Journal describing how and why he changed his mind on GMOs. You can read an excerpt below, and find the whole story on the Wall Street Journal’s website.

There are now encouraging signs that the more science-friendly environmental groups are recognizing this contradiction and beginning to shift their positions. Recently, the Environmental Defense Fund, one of the earliest groups opposing GMOs, revised its view on biotechnology after lengthy internal debate. EDF, to its credit, now “recognizes the use of biotechnology as a legitimate deployment of science in the search for effective solutions.”

I have often been attacked, especially by my onetime activist friends, for changing my mind on GMOs. But what was the alternative? To stick to a position that I knew to be false in order to avoid losing reputation? Environmentalism, perhaps more than any other philosophy, requires science. And science means that you must change your mind when the evidence changes, however inconvenient that might be.

So what is it about GMOs that made environmentalists so wary in the first place? The real objection, I suspect, has always been a deeper philosophical one, about human beings “messing with nature” in new and uncertain ways. The idea of technological hubris has long been a concern of the Green movement, also evident in the longstanding and equally misguided campaign against nuclear power.

These reflexes explain why environmentalism is often not the progressive force that it claims to be. Holding a progressive worldview means believing in the possibility of positive change, recognizing past improvements and seeing the potential of scientific and technological innovation to solve humanity’s most pressing problems. In their campaign against GMOs, environmentalists have flirted with reactionary politics, aiming to block innovation and to protect traditional agricultural methods in the service of often-romanticized notions of vanished rural idylls.”