Is Coffee the Fountain Of Youth You’ve Been Looking For? 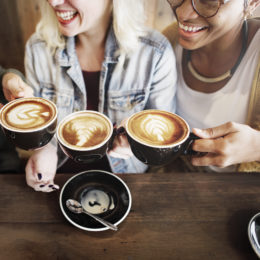 A “landmark” study in the journal Annals of Internal Medicine discovered the fountain of youth tastes a lot like freshly brewed coffee.

After examining the diets of more than 500,000 Europeans over roughly 16 years, researchers found that increased coffee consumption was associated with a reduced risk of death from all causes. (Cue the flood of headlines claiming “Coffee drinking could lead to longer life.”)

Not so fast, sensationalist journalism.

Just like claims that someone’s lifelong medical history can be sidestepped with an extra morning brew, this evaluation should be taken with a grain of salt – or perhaps in this case, sugar.

Although researchers followed hundreds of thousands of participants for more than a decade, volunteers were asked about coffee consumption only once. Scientists can hardly claim a trend exists because of a single data point, especially since people drink coffee differently at various points in their lives.

Gallup polling, for instance, shows that consumption decreases from 3.8 cups a day to as low as 2.4 cups as the coffee drinker earns more. Yet despite drinking fewer cups, high earners typically live longer. Clearly, there are more factors at play than the humble cup of Joe.

It shouldn’t come as a surprise to frequent blog readers that the International Agency for Research on Cancer (IARC) had a large hand in the study.

IARC is notoriously loose in issuing cancer classifications, claiming everything from red meat to cell phones and working the night shift all likely cause cancer in humans. In 1991, IARC shamed baristas everywhere by first declaring coffee as a possible carcinogen. And after digging in its heels for over 25 years, the agency recently admitted that coffee doesn’t actually cause cancer. Oops?

It would almost seem like IARC funded and staffed the coffee study in an attempt to wipe the egg off its face for being wrong for more than two decades.

Unfortunately for regular coffee drinkers – and those with a casual interest in their own health – nutrition science is regularly diluted by weak research and flashy headlines. The threat of science losing sway in the public eye is a serious concern in our time, which is why we must toss the sensationalism out with yesterday’s coffee. Fortunately, that advice isn’t rocket science.