Is Painting Your Nails Harming Your Health? 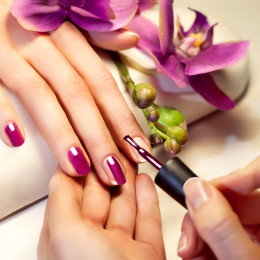 Earlier this week, the Environmental Working Group (an environmental activist group known for dubious science) released a new study with Duke University researchers that examined women’s levels of triphenyl phosphate (TPHP), a chemical sometimes used in nail polish. The researchers told the media women who painted their nails had “substantially higher” levels of TPHP than the general population and “These results indicate that nail polish may be an important contributor to short-term TPHP exposure.” But does TPHP exposure pose health risks?

TPHP is used as both a plasticizer (to make products softer and more malleable) and a flame retardant. It’s used in small doses in some nail polishes and lots of other products.

Scientists have not found any evidence that the chemical causes any negative health effects in humans. There have been a small number of studies in animals linking TPHP to health effects, but those results cannot be used to determine toxicity in humans. For example, immersing newly hatched zebrafish in a solution containing TPHP is far from the same as an adult woman applying nail polish containing TPHP to her nails.

EWG’s study doesn’t really add much to our existing knowledge of TPHP. It looked at only 10 types of nail polish applied to 26 women—an extremely small sample size. They found that women who applied nail polish containing TPHP had higher levels of TPHP in their urine 10-14 hours later. Only women who applied it to their own nails—not those who applied polish to synthetic nails while they wore gloves—had higher levels of TPHP, suggesting higher exposure occurs through the skin, not by inhalation (though again, very small sample size).

We now have a better idea that women can be exposed to TPHP, at least in the short term, by painting their nails, but there’s still no evidence this short term exposure actually increases any health risks.

Unsurprisingly, the media ran with this story that “toxic chemicals” could be in nail polish and published stories with outlandish headlines, including This Everyday Beauty Item Could Be Letting Fire-Retardant Chemicals Into Your Body” ( “Your Nail Polish Might Be Making You Gain Weight” and “Is Your Nail Polish Causing Weight Gain” (while one study linked high prenatal exposure to a product containing TPHP to weight gain in rats, there’s no evidence linking TPHP to human obesity, especially not in the adult women EWG studied).

We’ve thrown a lot of science at you, but here’s the key takeaway: EWG’s new study offers no evidence women should stop wearing nail polish.

Every product we use—regardless of whether it’s labeled “natural” or “organic” has chemicals, and those chemicals do end up in our bodies. We should certainly do more research on the health effects of TPHP and other commonly used chemicals—it’s a key part of what Congress is trying to accomplish with an update to the Toxic Substances Control Act. Instead of relying on an environmental activist group that often ignores piles of scientific research for health advice, let’s give more power to regulators to ensure the products on store shelves are safe.