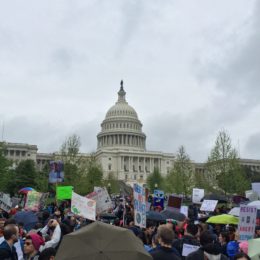 This weekend, science advocates in over 500 cities celebrated Earth Day by taking to the streets to March for Science.

Emerging from the comfort of our laboratories might be a good thing. Despite the fact that Pew Research surveys show Americans invest a high degree of trust in scientists – far more than the news, elected officials, or even community leaders – 83 percent of Americans cannot name a single living scientist.

Americans appreciate “science” in the abstract, yet common chemistries and technologies have whipped many parents and hasty health reporters into a fear-filled frenzy. Just last week, healthcare giant CVS caved to activist demands to remove parabens, phthalates, and perservatives from its personal care products – even though the application of such products can’t expose consumers to harmful levels of any of the now-blacklisted chemicals.

Unfortunately, activist pressure is responsible for damage beyond the consumer space.

Efforts to eradicate invasive zika-transmitting mosquitoes, feed impoverished nations, and reduce pesticide usage have met insurmountable opposition from the anti-GMO crowd. Despite the clear danger of a society ravaged by infectious diseases, anti-vaccine activists continue lobbying congress, and notorious anti-vaxxers Robert F. Kennedy Jr. and Andrew Wakefield even seem to have the President’s ear. And “natural” activists who can’t seem to understand the fundamental tenant of toxicology, the dose makes the poison, continue needlessly advocating for a synthetic-free world.

Louder scientific voices might do wonders convincing a hesitant public that modern chemistry and biotechnology are some of their greatest assets.