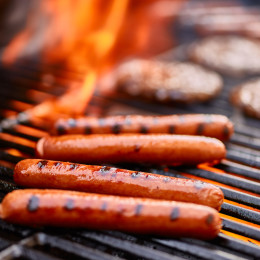 This month the National Toxicology Program (NTP) formally requested information on the production and consumption of red meat, processed meat, and meat cooked at high temperatures in order to justify their addition to the 2016 Report on Carcinogens.

Today’s post is brought to you by déjà vu, because we’ve got a sneaking suspicion that we’ve blogged about meat and cancer before.

Oh wait, we have. Dr. Joseph Perrone, our Chief Science Officer, also recently wrote an article on the subject.

Without re-hashing the past too much, let’s review:

Nutrition studies are inherently tricky due to their reliance on self-reporting. It’s impractical for a team of scientists to hover over the shoulder of a study participant during every meal for 75 years. If asked to recount the number of servings of meat you’ve consumed in the last month, you’d likely be unable to respond accurately. Do you have any idea how many ounces a hot dog is? How about the steak you grilled for Labor Day? Or the pepperonis on your pizza? It’s tough to draw any conclusions from studies modeled in such a way.

The NTP likely draws its interest in meat and cancer from last year’s classification of processed meat as a definite carcinogen, and red meat as a probable carcinogen by the International Agency for Research on Cancer (IARC).

The classification system doesn’t work as you may think. Rather than categorizing increasing risk, the IARC groups items based on the amount of research linking the substance to cancer in humans. If several sources are confident that a substance is a very mild carcinogen – but a carcinogen nonetheless – it is assigned to Group 1. Conversely, if the lack of interest in a subject yields only a single study exploring the cancer-causing potential of a substance which turns out to be dangerously carcinogenic, it will be given a lower rank.

This is an evaluation of hazard (can something cause cancer) rather than risk (does something cause cancer). These methods yield questionable results, so that motor oil is assigned the same category – Group 1 – as the ionizing radiation of a nuclear blast. Common sense will tell you that changing the oil in your car doesn’t carry the same consequence as walking into the smoldering remains of Chernobyl. Yet the two, and, apparently, processed meat, are Group 1 carcinogens.

We hope that the NTP focuses more strongly on risk assessment than the IARC did. But who knows – after all, in addition to red and processed meat, using your cellphone at night and working the night shift are also under NTPinvestigation for their dastardly cancer-causing potential.

At this rate, we fully expect “breathing” to be on the NTP’s next list.