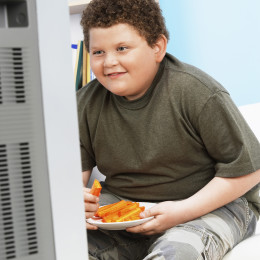 Despite a robust $20 billion weight-loss industry, Americans can’t seem to lose weight and keep it off. Instead of blaming cuts to recess, increased sedentary lifestyles, and consuming too many calories, researchers have come up with a new theory: chemicals are making us fat.

This theory, known as the “obesogen hypothesis” was coined in 2006 and is the basis for millions of dollars in grants from the National Institutes of Environmental Health Sciences (NIEHS) to researchers searching for links between common chemicals and obesity. The research is still very new and is very far from conclusive. Yet, despite little firm evidence linking chemicals to obesity NIEHS published a fact sheet this month warning consumers to reduce their exposure to “possible obesogens” by avoiding plastics in the microwave or products with fragrance.

Phthalates are a class of chemicals used both in fragrance in plastics and are one of the “chemicals that may be obesogens” identified by NIEHS. But two new studies in Environmental Health Perspectives (NIEHS’s own journal) cast even more doubt on this theory.

The first study examined levels of six different phthalates in the urine of women during the final three months of pregnancy. The researchers then followed up and measured the fat mass of many of these children between ages 4 and 9 and found no association between high prenatal phthalate levels and children’s body fat.

The second study, from Columbia University researchers, was similar, but researchers only looked at women who self-identified as African American or Dominican. Again, the researchers found no relationship between prenatal exposure to phthalates and obesity.

Unsurprisingly, neither study has been covered by the mainstream media. With an “if it bleeds, it leads” mentality, reporters aren’t generally interested in writing about what’s NOT making us fat.

There will surely be more research published examining a link between environmental chemicals and obesity—in 2015 and 2016, NIEHS is spending more than $10 million taxpayer dollars on research searching for such an association. But there’s still no reason to blame chemicals in canned food, plastic bottles, or perfume for our country’s high child and adult obesity rates. Perhaps investing more taxpayer dollars in getting kids away from TVs and onto sports’ fields and playgrounds would be a better use of taxpayer funding to fight fat.