Microwaving Plastic: The Do’s and Dont’s 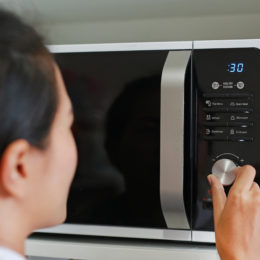 With most of the country’s students heading back to school, leftovers and meal prepping will be many parents’ saving grace during busy weeknights. But if there’s one old wives tale that makes mealtime more stressful, it’s the myth that you can’t microwave food in plastic containers. After all, microwaves do make food incredibly hot in a short amount of time, and with sensational headlines claiming your Tupperware could be “Super-Toxic” and “Sabotaging Your Diet,” it’s no wonder even a casual reader would believe the myth.

As explained in Harvard University’s Health Publications blog, the plastics-in-the-microwave fear centers around the belief that microwaved food containers can leach dioxins, phthalates, and bisphenol A (BPA) into food.

Dioxins are a group of structurally similar molecules which can build up in the body and cause cancer. But they’re not manufactured or added to plastics. Dioxins form when materials like garbage and wood are burned. As long as you don’t char your food in the microwave, you won’t encounter any dioxins in your leftovers – plastic container or not.

Phthalates and BPA are the latest scapegoats for America’s obesity crisis. In an opinion piece written in New York’s Watertown Daily Times, our chief science officer Dr. Joseph Perrone gives the skinny on why those materials shouldn’t make you wary of reheating leftovers in their containers. You can read an excerpt of the piece below, or in full on the Watertown Daily Times website:

In 2008, Good Housekeeping magazine put these claims to the test. It found that of 31 plastic bowls, bags, wraps and containers actually on the market, none leached chemicals into food while being microwaved.

It makes sense when you consider the safety hoops that plastic containers must jump through before making their way to your kitchen. The Food and Drug Administration requires manufacturers to conduct an extensive safety review of every substance intended to come into contact with food.

And as far as phthalates are concerned, most food containers don’t even contain the chemicals in the first place. They don’t need to: Phthalates make plastics soft and flexible, like the coating on a wire.

Holiday lights, for example, need to follow the shape of your roof and windows. Tupperware doesn’t need to fold in half to do its job.

More often than not, when researchers talk about certain chemicals being tied to biological processes, they’re referring to rodent studies. It should go without saying that while these investigations inform toxicologists about which substances warrant a second look, rodents are not humans, and their biological processes shouldn’t be assumed to function in the same way.

Mice, for example, don’t get addicted to nicotine. Any physician could tell you the same does not hold for people.

It’s certainly true that individual ingredients can harm rats and mice in high enough concentrations, but the same can be said of any substance, like water or caffeine. Sipping on four dozen macchiatos can be fatal, but interspersing your day with a few cups won’t do any harm.

For more than a decade, the Centers for Disease Control and Prevention has monitored actual chemical exposure levels in the population. Consistently, actual human exposure to BPA and a wide array of phthalates is tens, hundreds and in some cases thousands of times too small to ever cause a health problem. Short of finishing off your Tupperware as dessert, the risk from “toxic chemicals” in plastics is negligible.

In reality, plastics are made from a safe combination of chemicals — just like glass, ceramics and stainless steel. Chemicals build our world. And if parents are concerned about keeping their family healthy, it’s far more prudent to pay attention to the food inside the plastic containers than the containers themselves.

Fear over chemicals in your plastic containers amounts to little more than a scare tactic. But that doesn’t mean everything can safely go in the microwave.

Although you can cut down on waste living by the three R’s – reduce, reuse, recycle – single-use containers like those for yogurt or margarine aren’t meant to be heated if you do reuse them to store food. It’s not because they risk leaching chemicals though. Single-use containers don’t contain the right chemical ingredients to raise their heat tolerance enough to withstand getting nuked. Microwaving them could risk melting, and no one wants to clean up a pool of hot, molten butter tub. (But if you’re looking for some microwavable fun, find out what happens when you put Ivory soap in the microwave!)

When it comes to knowing what you can and can’t put in the microwave, look underneath your plastic container, plate, or bowl to see if it’s stamped “microwave safe.”