“Millions” (or Six) Against Glyphosate 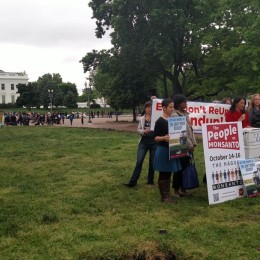 Last month, activists from Moms Across America, Care2, and the Organic Consumers Association descended on the White House to ask EPA to withdraw approval for glyphosate as a safe herbicide. Since the event was just a few blocks from our office, we decided to see what the hubbub was about. But ironically for a group touting “Millions Against Monsanto” signs, only six people showed up to protest—and at least half were representatives of the three groups above and (presumably) paid to be there.

These groups want the EPA to withdraw approval of glyphosate, but interestingly, the EPA inadvertently posted documents recently finding that glyphosate is not likely to cause cancer. The World Health Organization listed glyphosate as “probably carcinogenic” last fall; however, the European Commission has recommended glyphosate’s license be renewed until 2031. (See our previous post for more on glyphosate.)

What struck us about the protest was not just how little support it drew, but how bizarre and inaccurate the speakers’ language was.

There was an anecdote of a friend playing in glyphosate-soaked corn fields who now at 20 years old has stage 4 breast cancer. The implication is one of cause and effect. However, glyphosate doesn’t soak cornfields. As we noted recently, very little glyphosate is applied to fields. But this is a typical rhetorical approach of these activists: Name a person with an unfortunate disability or disease and claim they were exposed to a chemical of choice at some point in their life—implying cause and effect with no actual evidence.

It was also claimed that glyphosate is in rainwater. We were curious as to how this might happen, so we looked into it a little. The site Biofortified looked at an actual study commonly cited as showing that glyphosate is in air and rainwater. The study looked at rainwater in one part of the country (an agriculture-heavy part of Mississippi) and detected glyphosate, at extremely low levels (measurable in nanograms per cubic meter). Detection doesn’t mean much—the dose makes the poison, after all. The study found that glyphosate replaced insecticides that had higher environmental impact.

Lastly, and most troublingly, one speaker lamented that “eco-cide” was not a crime—not yet, that is. “Eco-cide” is apparently the killing of people by chemical companies—the idea apparently being that the scientists who develop glyphosate and other farming chemicals that help food grow should be thrown in prison. Think about that one for a moment.

We didn’t follow the protest from the White House to the EPA—we didn’t have all day to take part in scaremongering. But some people, apparently, do.