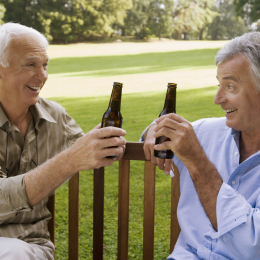 For many years, doctors and scientists have linked moderate to light drinking with a lower risk of heart disease, stroke, and certain cancers. Now researchers from the University of Texas Medical Branch have discovered a new benefit from light drinking: improved memory function.

The new study, published in the American Journal of Alzheimer’s Disease and Other Dementias, found that for individuals who are 60 years old or older (without dementia), light to moderate alcohol consumption (defined as 2 drinks a day for men, 1 for women) can increase their ability to recall memories of events. Researchers found that “exposing the brain to moderate amounts of alcohol may increase the release of brain chemicals involved with cognitive, or information processing, functions.” This is in line with previous research that has shown moderate alcohol consumption can help stimulate the growth of new nerve cells in the hippocampus, a region of the brain responsible for memory function.

The researchers utilized data from the Framingham Heart Study, looking at alcohol consumption and demographics of more than 660 patients and finding that alcohol consumption levels had “no impact on executive function of overall mental ability.” Improved memory function was only observed among older adults, not those in midlife.

Of course, these findings do not hold for heavy drinkers—problem drinking has been linked with memory loss. And researchers cautioned that the link could be due to the fact that older adults who consume alcohol may be healthier and have higher cognition than those who abstain. But even with these caveats, the study’s findings should be encouraging to those who drink moderately as they underscore the potential health benefits of moderate alcohol consumption.